Why does the naive barycentric hodgestar fail?

The discrete exterior calculus is defined first using circumcentric dual cells, because the primal and dual edges are orthogonal and thus the dual cells are convex. This leads to a diagonal hodge star for 1-forms that is defined as $\star_1 = \frac{|\star\sigma^1|}{|\sigma^1|}$ for a primal edge $\sigma^1$ and a dual edge $\star\sigma^1$, what has many computational advantages.

For barycentric cells, the operators are more complicated, constructions for $\star_1$ are found for example in this paper by Mohamed, Hirani and Samtaney. Their hodge star has no sparse inverse and while they suggest how a sparse inverse could be constructed, it would not satisfy the identity $\star_1\star_1^{-1} = -1$.

The reason for the more complicated constructions is, that the dual edges are no longer orthogonal and are kinked at their intersection with the primal edges. 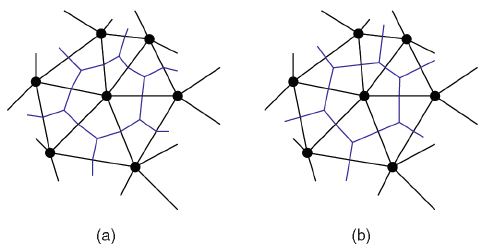 I am now wondering, why you cannot construct a diagonal hodge star by intergrating over the kinked lines. The relevant identities are

For a circumcentric dual 2D mesh $\star\omega^1$ represents are straight line that connects the circumcenter of two triangles and intersects the center of the primal edge.

Which part am I missing, why you cannot construct a diagonal definition that allows for non-convex boundaries composed of split edges with a kink in the middle?

pde computational-geometry discretization
Share
Improve this question
edited May 9 '20 at 13:59

Browse other questions tagged pde computational-geometry discretization or ask your own question.

26
Why is the time dimension special?
1
Raviart-Thomas elements global definition and compact support
4
Why does the displacement have to be small to use the infintesimal strain elasticity equations?
1
Why rational numbers in the Lenstra–Lenstra–Lovász algorithm?
3
FEM problem: how to get a feeling for size of problem
3
Electromagnetism FEM (FEniCS) interpolation - leakage effect