I am looking for a way to fit a spline of order 2 to a 2d image or point cloud. The input will be an gray scale image. The start and end points are given as 2D coordinates. The goal is to find a spline that minimizes the energy or average image value that the spline is crossing.

It might be easier to understand with the example image: 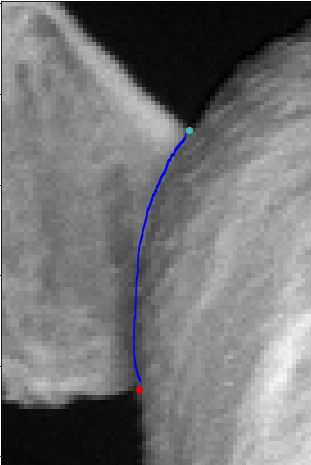 The blue line is the target. It should approx. through the valley. I hope it is clear what I need...

I already tried to solve the problem with a LiveWire algorithm but that doesn't lead to a smooth and reliable result.

The programming language is python if that is of any importance.

image-processing curve-fitting
Share
Improve this question
edited May 7 '20 at 14:47

Do you mean you want to fit a polynomial of degree 2 passing through the end points? If so, it’s a 2D optimization problem. Parametrize the curve in some way, say, as a function of a third point on the curve. Evaluate your cost function on a set of points in the image, say a grid of points covering the image or a region of the image around the straight line connecting the points if you want to limit the possible curves. Pick the global minimum and then refine the result using a nonlinear optimizer.

If you meant you want a spline with several nodes along the way, the larger optimization space can result in an intractable problem. If the path can be roughly approximated by a single polynomial, you can start with the method above and then refine it. Find the minimum of the image for points along the curve, and use this point to divide the curve into two segments. Then apply the same method to the two smaller pieces to get a two-piece spline. You can keep subdividing until the cost function converges or the number of subdivisions is more than a preset limit.

Not the answer you're looking for? Browse other questions tagged image-processing curve-fitting or ask your own question.