Using this technique, I get the results I want but I would like it to be faster. 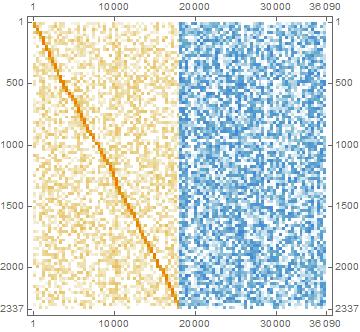 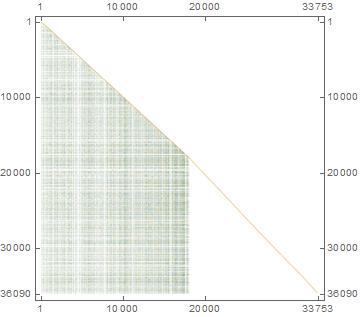 The sparsity pattern arises out of the constraints on the contact of two subdomains in a finite element problem. The coefficients on the left are positive whereas the coefficients on the right are negative. This is due to a sign convention. I ordered the node indices of each subdomain using a nodal connectivity matrix from the finite element mesh and fed that into METIS (which made my conjugate gradient solves MUCH faster!).

I primarily use Eigen and Intel MKL for my matrix algebra, but also use SuiteSparse for their much-faster QR decomposition routine. Although not important for this question, I am including my procedure for interfacing between Eigen and SuiteSparse, just in case it does matter. Here is how I compute the nullspace (kernel) of $A$:

From my research on this website and other sources, the QR decomposition seems to be the best way to compute the nullspace of a sparse matrix. Furthermore, SuiteSparse's SPQR appears to be the fastest and most versatile routine for sparse matrices. I have compiled everything on Windows and linked SuiteSparse against Intel MKL (probably not relevant in this problem) and Intel TBB, and I do achieve limited multithreading while using SPQR.

I think my code is optimized for my platform of choice (Windows) on a six-core CPU laptop. I didn't have much luck getting the GPU accelerated features of SPQR to work, but that could be my weak GPU. However, my real question is if there is a better way of approaching this problem. Is there a linear algebra trick I am missing? Maybe some matrix decomposition I can perform on $A^T$ before performing the QR?

Thanks! (I wonder how long it will take someone to delete the pleasantries)

Update: I used umfpack to calculate the LU decomposition first, and then calculate the QR decomposition. $$P_rRAP_c=LU , U^T=QR , Q = [Q_1Q_2] , Nullspace(A) = P_cQ_2$$ I have not posted the additional code because it is a confusing c-style mess! The nullspace is computed in a fraction of the time (including the LU decomposition), but the resulting sparsity pattern is quite bizarre which appears to slow down subsequent operations. My numerical results appear to be unaffected. If $A$ is very sparse, there is negligible improvement in my overall finite element calculations. As $A$ becomes less sparse (more constraints), there is a very significant increase in performance. Maybe a different node ordering strategy would fix this. 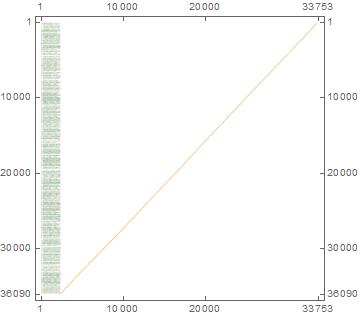 Browse other questions tagged linear-algebra sparse-matrix eigen nullspace or ask your own question.

5
Nullspace algorithm for a sparse matrix
9
Solving Lx = b for big sparse Laplacian matrices
6
Eigen - store sparse matrix as binary
2
Methods for solving rectangular, full-rank systems of equations -- which is best?
5
Nullspace calculation of large matrix with rational numbers without round-off errors (exact)
1
How to implement this even-odd matrix decomposition efficiently?
5
Accurately Computing a Positive Vector in the Nullspace of a Matrix