I want to evaluate this integral numerically based on a representation of the product density functions $\rho_m(x_m)$ on a grid $\{x_{m,k_m}\}$, which basically leads to the term (integration weights set to one, for simplicity):

I've been facing this integral for quite some time now, with the goal of disentangling the max-function and arriving at a way to perform the summations separately.

I'd appreciate any comments on how to solve this integral numerically.

Edit: Unfortunately I can not comment on your question. Perhaps someone can like my answer to get a reputation of 50. That's no joke!

Anyway, you may use a Gauss Laguerre quadrature or Gauss Hermite quadrature to calculate it. The quadrature rules are designed for integration kernels of following form:

and $L_n$ is the n-th Laguerre polynomial.

and $H_n$ is the n-th Hermite polynomial.

The given quadrature rules should rather be considered as an indication. They should easily extendable to multivariate functions.

"I've been facing this integral for quite some time now, with the goal of disentangling the max-function and arriving at a way to perform the summations separately."

Let's consider the integral in 2D. 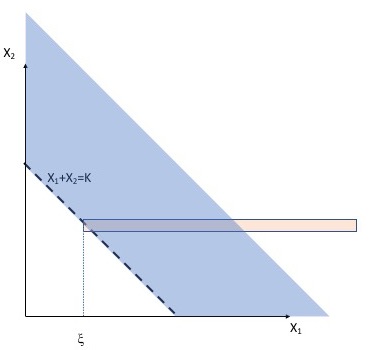 First it is the integral in $dx_1$, as shown by the strip in the sketch:

Once the functions $I_1$ and $I_2$ are known (i.e., evaluated to any desired accuracy) the second integral can be calculated as

Just another idea how you may proceed:

I restricted myself to 4 dimensions, however this should also work for 20 dimensions.