How to calculate skewness for a mesh?

I am writing a code to calculate mesh quality stats such as: cell volume, face areas and non-orthogonality between faces (basically something like OpenFOAM's checkMesh).

So, what is the metric to measure skewness?

I found the following code used in OpenFOAM to calculate skewness, but the math behind it is not very clear:

Note: the /* */ comments are mine, however, I am not 100% sure about my interpretation of the variables. 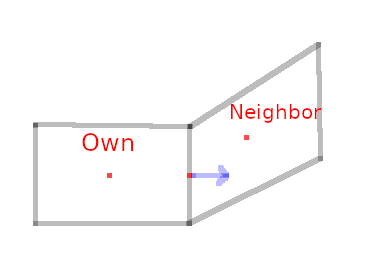 Hence, if the mesh is not skewed, sv -and as a result svHat- will be zero. If it is skewed, as in the picture, the math is slightly different

with theta being the angle between d and fAreas[facei]. Let's reorganize (again I am disregarding ROOTVSMALL)

This way it is more clear that how this is a measure of skewness. theta can take values in the open interval $(-\pi/2,\pi/2)$ for meshes without degenerate elements and 1/cos(theta) takes values in the interval $[1,\infty)$. At the last step, there is the normalization svHat = sv/(mag(sv) + ROOTVSMALL); which generates a unit vector svHat and gives you the skewness in each direction. 0 means no skewness in the given direction and other values will signify some skewness. I think $-1$ would be the most skewed case and correspond to a degenerate neighbouring element.

As Maxim Umansky mentioned in the comments to the question, there is a wikipedia article which discusses skewness. Those are valid measures of skewness of an element, however, they do not say anything about the skewness of the grid. Except for the one based on equilateral volume. For example, according to those measures meshing of a rhombus domain with rhombus elements would be considered skewed, however, that is not what you want.

Another skewness definition I am familiar with is $$1-\frac{||c-d||}{|F|},$$ where $F$ is the face between two neighboring elements, $|F|$ is the area of the face, $c$ is the centroid of the face $F$ and $d$ is the midpoint of the line segment connecting the center of Own element to the center of neighbouring element. In this case, if $c$ and $d$ overlap for each couple of neighboring elements, it means the mesh is not skewed and you get a value of $1$. Hence, this definition of skewness is bounded above by $1$ but it can be an indefinitely large negative number.

Differences between this definition and OpenFOAM measure

Due to these reasons, even though I believe that they are equivalent definitions I cannot prove that they are, e.g. how do I compare a vector to a scalar? However, both would characterize the following two elements as highly skewed so that is my evidence towards their equivalence. 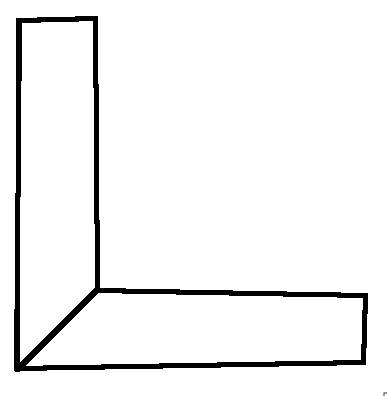 Not the answer you're looking for? Browse other questions tagged finite-volume mesh openfoam unstructured-mesh or ask your own question.

3
number of tetrahedra in unstructured mesh when edge length is halved
0
mesh spatial dimension in OpenFOAM
2
Getting adjacent cells map for an unstructured polyhedral mesh
7
Mesh ordering algorithms used by COMSOL Multiphysics
2
Convert Unstructured Mesh to Structured
2
Flux sign and face normal confusion in finite volume method
1
How to compute gradient of a cell having a boundary face?
3
Is mesh orthogonality important for FEM?