I came across an article that illustrates the effect fo Peclet number on concentration profiles in different branches in the microfluid channel (ref). 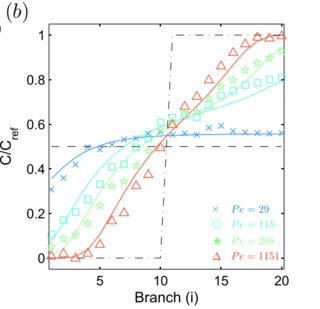 I would like to request for explanations/references that explain how such an analysis has to be done. For instance, I am looking for description on how Peclet number is computed for a microfluid channel while simulating 1D transport.

EDIT: The concentration profiles are obtained after performing numerical simulations. The equation that is solved is the 1D convection-diffusion equation

Browse other questions tagged fluid-dynamics simulation reference-request microfluidics or ask your own question.