I would like to find the contours of a scalar function $u(x,y)$ available as a discrete set of function values $u_i = u(x_i,y_i)$ over a scattered set of points $(x_i,y_i), i=1,...,N$. In my case, the scattered data comes from a numerical solution to a PDE using the RBF finite difference method, however interpolation of any type of scattered data is just as relevant.

In a related thread, the recommendation was to form a triangulation of the scattered points first, and then using a common contour algorithm such as marching triangles in 2D. While this is a tested approach, building the triangulation defeats one of the primary strengths of the RBF-FD method, which is exactly the fact it can avoid polygonal meshes. One of the answers in that thread suggested a RBF approach could work better.

Apart from the point coordinates and function values, suppose I also have the adjacency graph for the RBF-FD stencils of size $s$, and the RBF-FD differentation weights $w_i$:

which are constructed in a way, that they can provide approximations to various (linear) spatial differential operators $\partial_x, \partial_y, ...$.

Returning to the initial problem, finding a contour level $h$ can be recast to finding the level set (zero contour) of the implicit function,

Given some initial guess $\boldsymbol{p} = (p_x, p_y)$ of a point near the contour, we can try and find a projection $\Delta\boldsymbol{p}$ so that

An example of the approximate projection result is shown in the figure below. First, I identified the scattered points near the contour by looking for stencils, where the sign of $\phi$ changes. Using the RBF-FD spatial operators to construct the gradient $\nabla = (\partial_x, \partial_y)$, I could project the nearby points to the target contour: 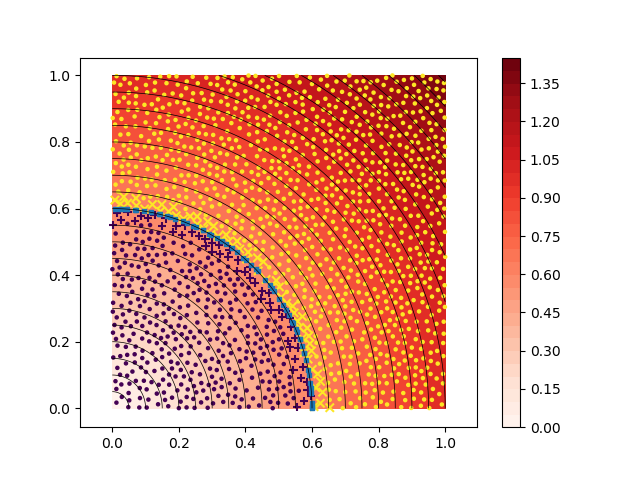 What I am missing now is a robust way to connect the projected points into a single contour. Is their some graph approach that could be used (construct the shortest path)?

In view of the marching squares algorithm, I am also anticipating the path-finding will have disambiguation difficulties near saddle points. Is their any way to detect such saddle regions and if yes, how to make the path-finding robust? 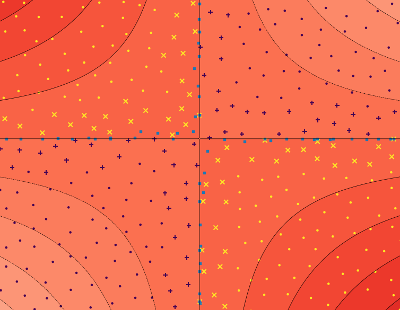 Maybe this is not a full answer to your question. However, I am currently developing my own unstructured mesh generator and found this toolbox quite helpful. Perhaps there are some algorithms which will help you.

Short (not complete) overview of the genetic algorithms for the TPS problem:

Not the answer you're looking for? Browse other questions tagged pde visualization graph-theory unstructured-mesh meshless-methods or ask your own question.

0
contour plot of cloud of points

8
Where to find data sets for testing minimum vertex cover algorithm for bipartite graphs?
4
What is a good introduction to graph theory / algorithm
2
Evolutionary algorithm - Traveling Salesman -fitness function
10
Could you give examples of serious usage of meshfree methods?
1
Does the box-covering algorithm work also for directed graphs?
4
Efficient algorithm to decide if a graph is a cactus?