Basically, I'm trying to use Least-Squares to estimate the parameters of a DC motor.

My system can be modeled by the following matrix equation:

From what I understand (admittedly probably not enough), I can estimate what the constants are for the vector $\begin{bmatrix}L,R,k_t,J,B\end{bmatrix}^T$ if I happen to know the values of the time-dependant variables for a handful of data points. If I take the equation to be of the form $Y=M\times K$, then the least-squares estimate at a particular discrete moment should be given by $\hat K=(M^TM)^{-1}M^TY$.

I have a motor set up to be driven by a sinusoidal voltage signal, offset so that the current doesn't reverse (for simplicity). I've measured the angular rate, the applied voltage, and the applied current. To get the necessary derivatives from the noisy signals, I built a sinusoid-fitting script in MATLAB which minimizes the average absolute difference between the fit signal and the noisy signal across all the measured data points. I'm no statistician, but the resulting fit eyeballed as "okay" so I moved on.

Using a smooth fit curve for each of my measured parameters, I calculated the necessary derivatives and plugged everything into MATLAB. (I'm aware that K = inv(M.'*M)*(M.'*Y) isn't the most computationally-friendly, but I need to stick to the experimental procedure I listed in my write-up.) 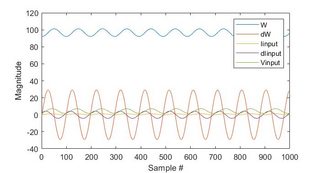 My output for $\begin{bmatrix}L,R,k_t,J,B\end{bmatrix}^T$ is absolute garbage though, and none of the values MATLAB spits out seem plausible. There are absurdly large values, very small values, and lots of negative values. (Physical properties shouldn't be negative.)

I had planned to estimate $\begin{bmatrix}L,R,k_t,J,B\end{bmatrix}^T$ for each of my data vectors and then average those results, but I clearly won't get anything meaningful when my results are already useless.

Would anyone here happen to have an idea where I might have gone wrong?

I've stared at my code until I went cross-eyed without making too much progress, so I suspect that it might be a case of "garbage-in leads to garbage-out." My slightly-educated-guesses for what's happening are:

Does anyone have any thoughts?

(If you're looking for a specific question, how about "under what experimental conditions would the math I've described work?")

I think I understand what you did, even without further explanations. At each time step $t_i$ you are solving in the least-squares sense a system of equations of the form $Y(t_i) = M(t_i) K$, with $M(t_i) \in \mathbb{R}^{2\times 5}$, separately, to get an estimate of a time-independent vector $K \in \mathbb{R}^{5}$, and then you are hoping to somehow combine the estimates.

Unfortunately, this won't work, because these systems of equations are undertermined, as noted in the comments, and thus have each an infinite number of solutions; the LS formula only gets one of them (and a different one for each system).

What you need to do instead is solving in the LS sense the complete system of equations that you get by combining all equations:

This will get you a single estimate of $K$ that minimizes the total error under a suitable model. The matrix $\mathcal{M}$ has full column rank generically, so this problem should be well-posed, unlike the previous ones. (But this is not an valid excuse to use bad numerics like inv(M'*M).)

So the answer is 1. you've overlooked something fundamental in the math. You will need to get yourself familiar with the math of least squares, if you want to be able to understand this kind of estimations.

Not the answer you're looking for? Browse other questions tagged computational-physics software least-squares data-analysis or ask your own question.