I have a linear system

with $A$ being Hurwitz (i.e. the solutions may oscillate but will eventually tend to zero) but really stiff. $A$ might be large, but I can do explicit solves.

I want to integrate it in time. Since it is coupled with a flow solver, stability is my primary concern. However, since my flow is integrated with order 2, I would fancy a 2nd order scheme for $(*)$ too.

I found that the implicit trapezoidal rule gives accurate and stable solutions. But the oscillations in the initial phase will likely destroy my simulation.

That's why I went for BDF2. Here, however, I face the problem of the initialization (I need a second order approximation of the value at the first time step computed with a different scheme). The canonical choice of Heun's method led to extreme overshoots in the approximation. Things slightly improve when I use an Implicit Euler step for the prediction. But the correction step is still explicit and produces the overshoot.

In both cases, a smaller time step improves things -- but I don't want to go to small.

So my question is: Is there a method that gives my a second order increment of

that completely avoids the explicit application of $A$?

Below are plots of my numerical tests. I have cropped the y-axis to better see what is happening.

BDF2 with one step Heun for initialization:

Actually, in the above plots, only the output of the system was shown, namely $y=Cx$, where $x$ is the state and $C$ is a constant matrix.

Plot of $x$ computed with the Implicit Euler scheme:

Plot of $y=Cx$ computed with the trapezoidal rule

Close up for the trapezoidal rule on the initial phase -- large time step:

Close up for the trapezoidal rule on the initial phase -- small time step:

EDIT: some words on the system (matrices)...

The system derives from a semi-discrete approximation of the incompressible Navier-Stokes equations that is coupled to a controller. In theory, it reads

See comments for the original discussion.

The lack of L-stability of the trapezoidal rule in the first step is the source of your problem. A simpler and famous toy problem that shows the point is the Curtiss-Hirschfelder equation $$y'=-2000(y-\cos(t)) \\y(0)=0$$

Integrating this with Backward Euler and the Trapezoidal rule gives the following result (I wrote the easy routine myself for illustration purposes, without using odeint or other libraries) 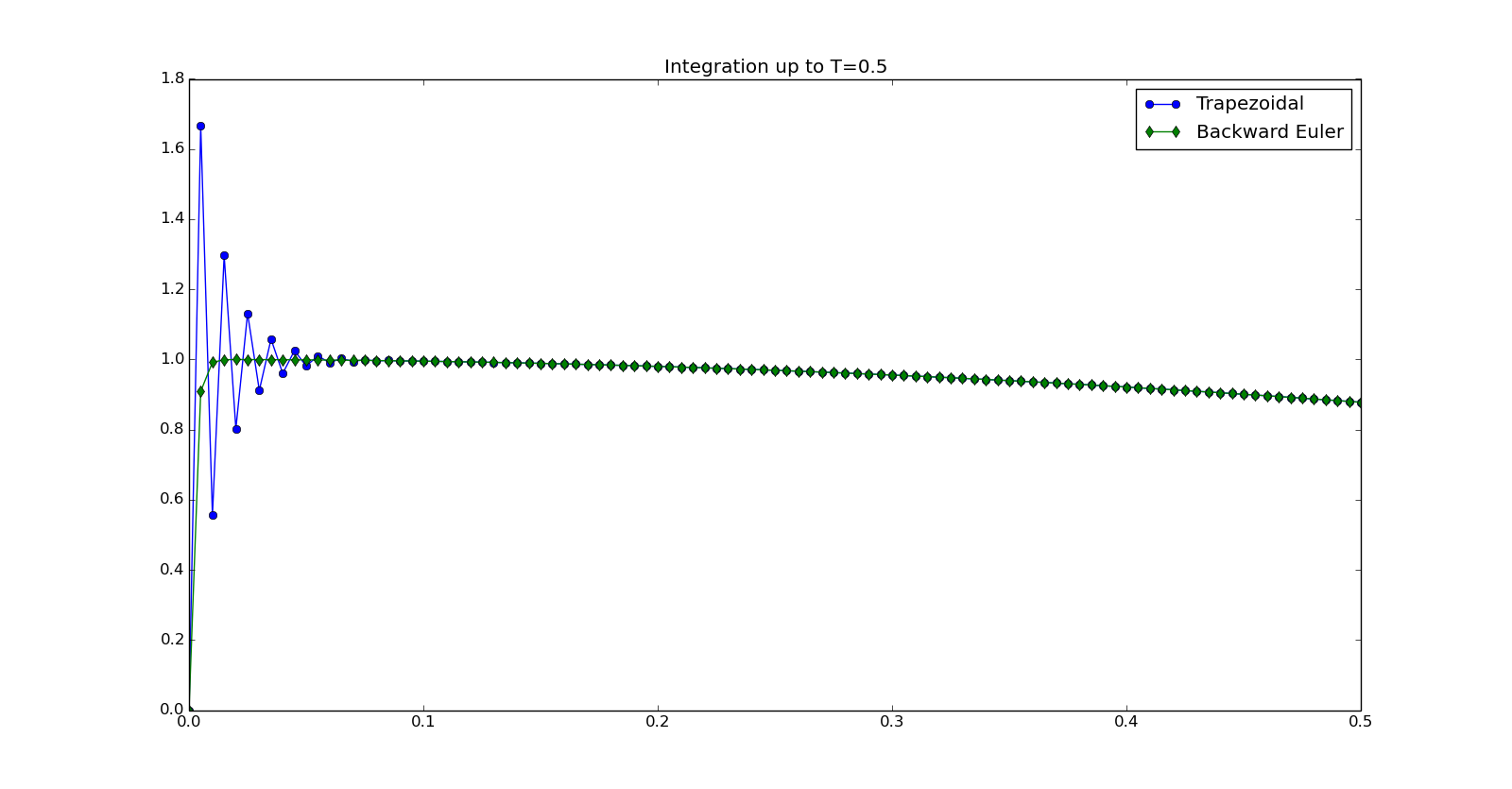 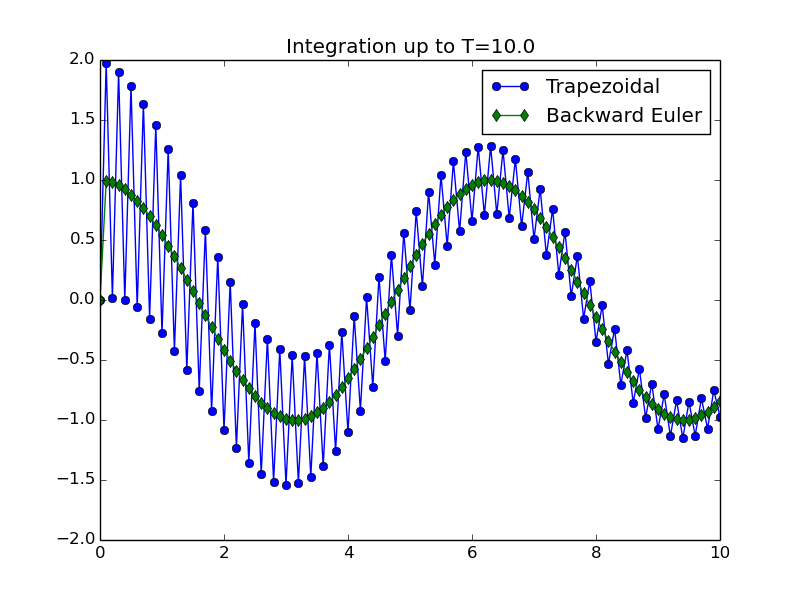 obtained with the following Python snippet

BDF2 should be started with a second-order L-stable scheme such as SDIRK.

which is exactly your problem. The good point is that BDF2 is L-stable, so as long as you take an L-stable method with order 2 as first step, you'll have a second order scheme which won't have those wild oscillations at the beginning

Another way could be to choose as first step the exact solution which would require to compute $e^{h A}x_0$ with some suitable routine for the action of the matrix exponential.