I have output from a 3D linear elasticity finite element simulation which uses linear tetrahedral elements, such that the displacement is continuous over the nodes but the gradient is not ($C_0$ continuous). I wish to "upgrade" the displacement data so that it can be reported as a $C_1$ continuous quantity which I can directly differentiate to produce the gradient, which would yield a consistency that I find appealing. Instead of directly interpolating gradient data over the nodes (or using a higher order basis function, which of course would make this exercise moot), I wish to interpolate the primary variable, displacement, as a quadratic polynomial with splines.

For 1D quadratic splines, each element or segment takes the form: $$f_e(x)=a_e+b_ex+c_ex^2$$ $$\nabla f_e(x)=b_e+2 c_ex$$ To form the system of equations, the function value and gradient are matched at end points. And since this is 1D, each end point connects to at most one other segment. $$f_e(x_i)=f_{e+1}(x_i)$$ and $$\nabla f_e(x_i)=\nabla f_{e+1}(x_i)$$ Such is the predictable nature of this arrangement that you are guaranteed to have $3(n-1)$ variables and at least $n+2(n-1)=3n-2$ equations. This can be supplemented with an additional assumption or solved in a linear least squares fashion. Awesome.

The hard part is that each node is not limited to 2 neighboring elements, in some cases it can be upward of 20! In one very modest case (I usually work with much finer grids), I have approximately 2000 tetrahedra and 500 nodes, with 51,000 (!) combinations where I must enforce gradient continuity. For example: if two tetrahedra (T1, T2) share 3 nodes (A, B, C), I must enforce gradient continuity for at A, B and C using the spline variables for T1 and T2.

This yields a sparse matrix ($10^{-4}$ sparsity) with $4t+3*51,000 = 161,000$ equations and $10t=20,000$ variables, and a $161,000$ x $3$ right-hand side (each component of displacement is independently interpolated). This is obviously way more complicated than calculating the original finite element system, which seems counterintuitive to me. Nevertheless, it does work...slowly. In the case above, I solved the original finite element system in 500 milliseconds and the interpolation took 30 seconds. I didn't even have the memory needed (it blew up to 120 gigs or something silly like that) to interpolate my other grids which takes a whopping 4 seconds to solve per time step. I am using SuiteSparse's SPQR solver, which produces a least squares solution using a QR factorization of the giant sparse system.

Examples plotting pressure (trace of the gradient) without interpolation: 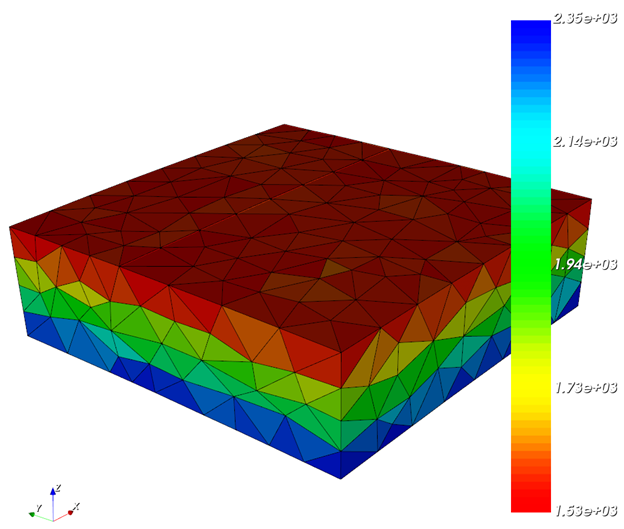 and with the procedure above: 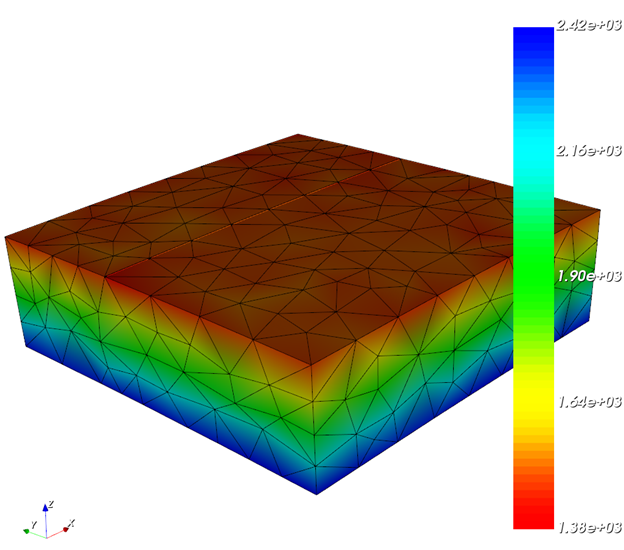 Browse other questions tagged finite-element interpolation least-squares or ask your own question.

6
Compute spatial second derivatives in Isogeometric analysis
7
Least Squares and Fourier Series
2
Finding jacobian matrix of cubic finite element
4
$L^2$-error in FEM: how to compute integral over reference element?
4
Why does the displacement have to be small to use the infintesimal strain elasticity equations?
5
Evaluating the surface integral in an FEM (Finite Elements Method) procedure
0
quadratic trial functions for a 2d FEM calculation
1
Factorization of cubic spline interpolation matrix
1
inclined/general Dirichlet boundary conditions