I have an $n\times n$ grid, and each point on the grid is assigned two values: a score, and an (inverse) speed factor. There is a "turtle" moving along the grid, and it's goal is to maximize it's score. Each time it moves to a point $x$ it gets the score $s_x$ at that point, but it takes $\epsilon_x$ turns before it can move again. The turtle can only move in the four cardinal directions (north, east, south, west) and in the "center" direction (remaining where it currently is).

I want to assign a third value $p_x$, the "potential" at $x$, which helps the turtle find an optimal spot to move to. If the grid were extended to be continuous, the potential function should be continuous with a first derivative (or gradient).

A natural choice for the potential function satisfies

(Notice that this almost exactly defines a qtable, except for the differing $\epsilon_x$ values.)

For now, assume that $\epsilon_x$ is constant. The equation happens to then be the same as a Discrete Poisson equation. This means that physically $p_x$ is the potential field in a system where each point has a $-s_x$ charge on it. There are many ways to solve the Discrete Poisson equation, but one of the fastest is to use spectral methods. See here for using the Discrete Cosine Transform (DCT) to solve it. Our grid can be rather large ($50\times 50$), so to fit within a one-second time constraint we need an $O(n^2\log n)$ algorithm.

Notice that this is the finite difference equation for

You can use an iterative method to find $p$. Do the following steps:

Assuming you use the DCT method you linked to solve the Poisson equations, then steps 1 and 2 only take $O(n^2\log n)$ time. The convergence rate of step 3 is exponential, so very few iterations are needed. 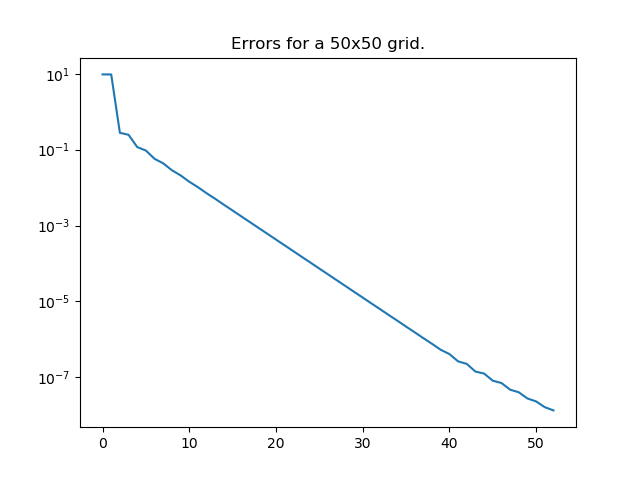 The trickiest part is finding the convergence rate. Looking at the DCT method in that link, step 2 involves finding

Therefore the method converges exponentially. Unfortunately this implies that unless $\hat{\gamma}$ is not close to $1$, it won't converge.

Not the answer you're looking for? Browse other questions tagged poisson fourier-transform spectral-method or ask your own question.