In the lecture notes, I read the following consideration:

For the inf-sup condition on $B_h$ to be satistfied, I need $B_h$ to be surjective, BUT if I have a linear application (to make an example) from $\mathbb{R}^3 \rightarrow \mathbb{R}^5$, then by the rank theorem: we have indeed $$3 = \dim(\text{Im}) + \dim(\ker)$$ and this implies that it cannot be surjective. I'd say that the only way for that remark to make sense is when I have equality in the dimensions: in that case, being surjective is equivalent to be injective. Therefore, $B_hu_h=0$ only for $u_h=0$. 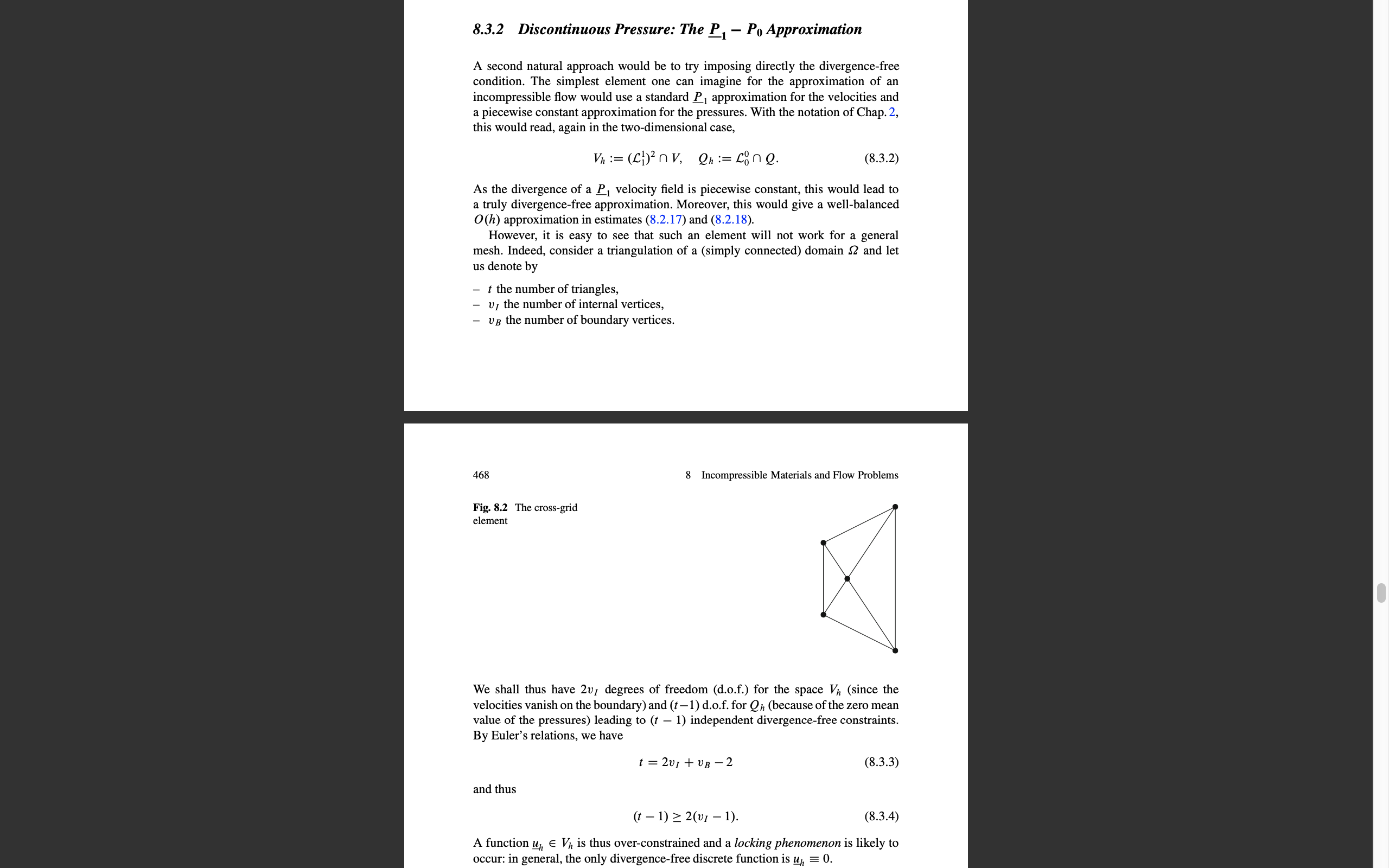 He says essentially that, even if you don't have equality in the dimensions, you're going to have $\ker(B_h)=\{0\}$, and I really can't figure out why.

I have a friend who is amazing on FEM and mixed FEM (our research group works on HDG -which is pointwise divergence-free- for incompressible flows), but unfortunately, he is not on SE. I will see if he has time to look at some of your questions. My naive (but somewhat educated) opinion is that, this is a specific example for some meshes.

(Before I begin, just to make sure that we are on the same page, $\text{dim}(V_h)$ would be the dimensionality of the physical space (for example, in 2-D, 2) times the number of interior velocity DoFs (N) -since the velocity vanishes on the boundary- times the polynomial degree used (in this case, 1), so 2*N. $\text{dim}(Q_h)$ would be equal to the number of triangles (t) minus 1. I am not sure if this is confusion on my side, but wanted to make sure.)

In case of $P_1-P_0$ elements, if you were to construct a piecewise linear continuous divergence-free velocity field, it may end up being zero almost everywhere, since it has to vanish on boundaries and its divergence has to be zero. We can show that by counting the constraints(Brezzi-Fortin-Doffi appeals to the famous Euler's identity for planar graphs, also check this math.SE answer). According to their argument, $u_h$ is over-constrained($\text{dim}(Q_h)>\text{dim}(V_h)$), hence it must be that $u_h\equiv 0$. If you also check example 8.10.2 (criss-cross mesh for $P_1-P_0$ elements) on pg.508 (in the version I have), where the row rank of the matrix representation of $B_h$ is less than its number of columns, hence $u_h$ is not over-constrained. Though, apparently, there are other problems.

Not the answer you're looking for? Browse other questions tagged finite-element navier-stokes stokes mixed-formulation or ask your own question.

14
What spatial discretizations work for incompressible flow with anisotropic boundary meshes?
1
Discretization of lifting operator in BR2 scheme
3
In mixed elliptic formulation, what are the weakest requirements to ensure the flux is in $H^1$?
7
Mixed Finite Element Method for the Stokes System—Some Implementation Details
4
Interpolation estimates for $H^1$ into $P_1$
4
Discontinuous Galerkin: confusion about the weak formulation for linear advection equation
1
SIPG method for $-\nabla \cdot (\nu \nabla u)=f$