Suppose for a grid-based calculation a grid is used such that the grid Jacobian is discontinuous. For example, in 1D, for a domain $x \in$ [0,1], one half of the domain is covered uniformly by twice as many grid points as the other side of the domain (and this always remains so as the number of grid points is increased). This grid can be illustrated by this plot, showing the x coordinate of the grid point vs. its index normalized to the total number of grid points. 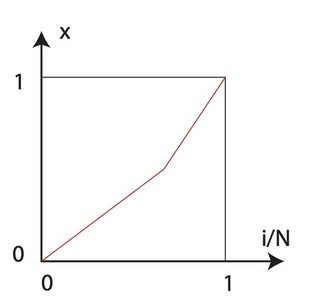 The Jacobian for this grid, representing the transformation of the x coordinate to the grid index is clearly discontinuous at x=1/2. What would be the implications of using such grids for finite-difference of finite-volume calculations such as solving ODEs or PDEs? Would it reduce the grid convergence to the first order? Or not necessarily? Can it lead to losing grid convergence altogether? Would a finite-element (or spectral element) method have an advantage on discontinuous grids, compared to finite difference or finite volume based methods?

I am not an expert on this question (I used finite elements mostly as a student) but I did use finite differences with a 2D uneven grid recently. My intuition is that, if you use the right discretization scheme then there is no loss of precision - in fact you might have a very good reason to have more points in one region. If you blindly use the "uniform grid" discretization schemes then for pretty sure you will lose precision.

If we assume for simplicity that you're working with finite differences in 1D, then what you really want is to discretize the operator on your grid. This is done for example here: https://math.stackexchange.com/questions/2470702/finite-difference-method-for-non-uniform-grid

With the proper discretization, you should be able to get the correct order of convergence.

I was looking for a similar problem today and I came across this answer, the article cited in it is really worth a read. https://scicomp.stackexchange.com/a/481/41372

29
How can I numerically differentiate an unevenly sampled function?