I am trying to solve problem $15.1$ from Numerical Linear Algebra by Trefethen and Bau, which reads

EDIT: In case it's relevant, here is the full exercise: 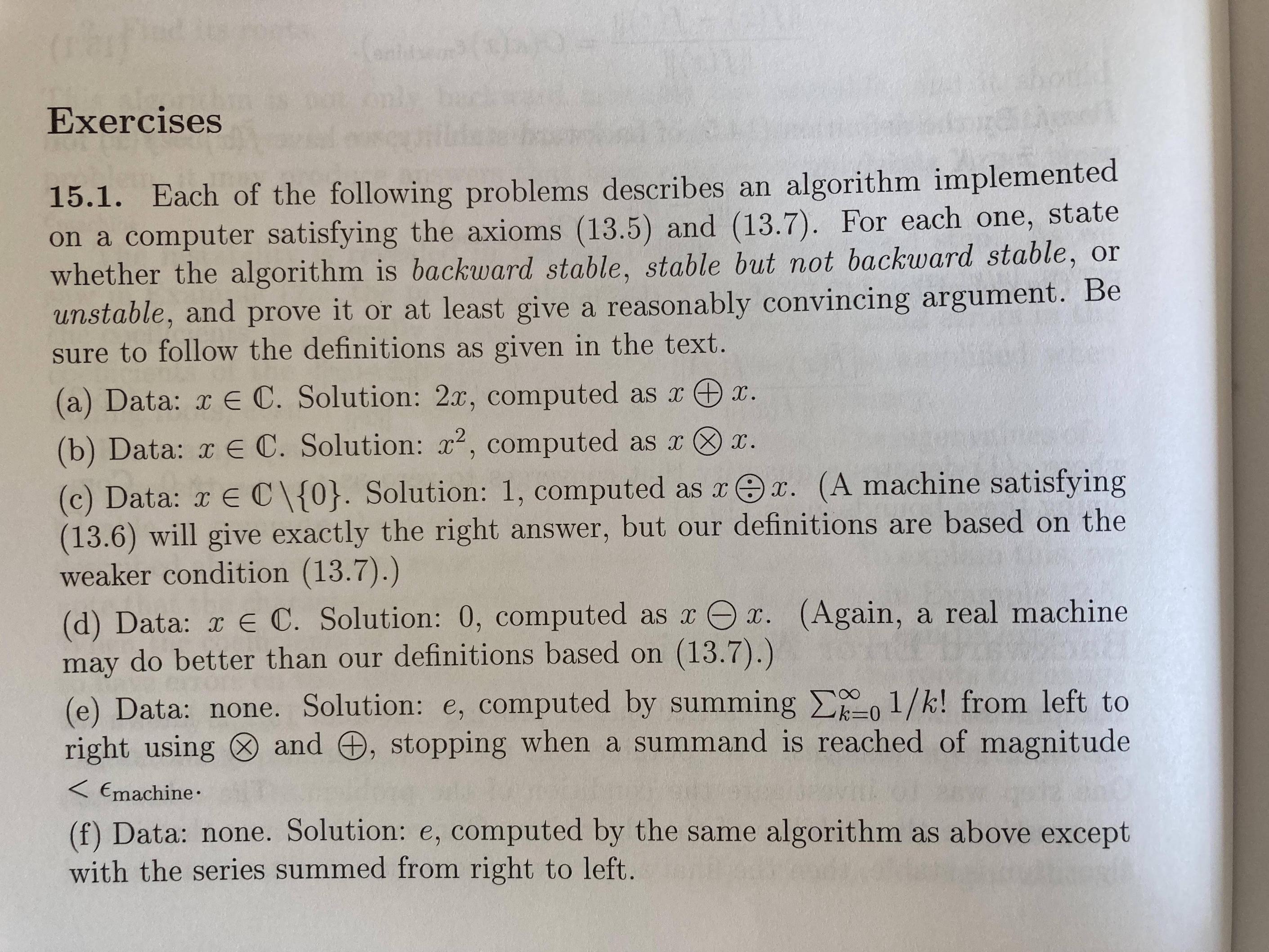 The following are the definitions of stability and backward stability given in the book. I didn't see any definition for unstable, so I assume it just means "not stable". 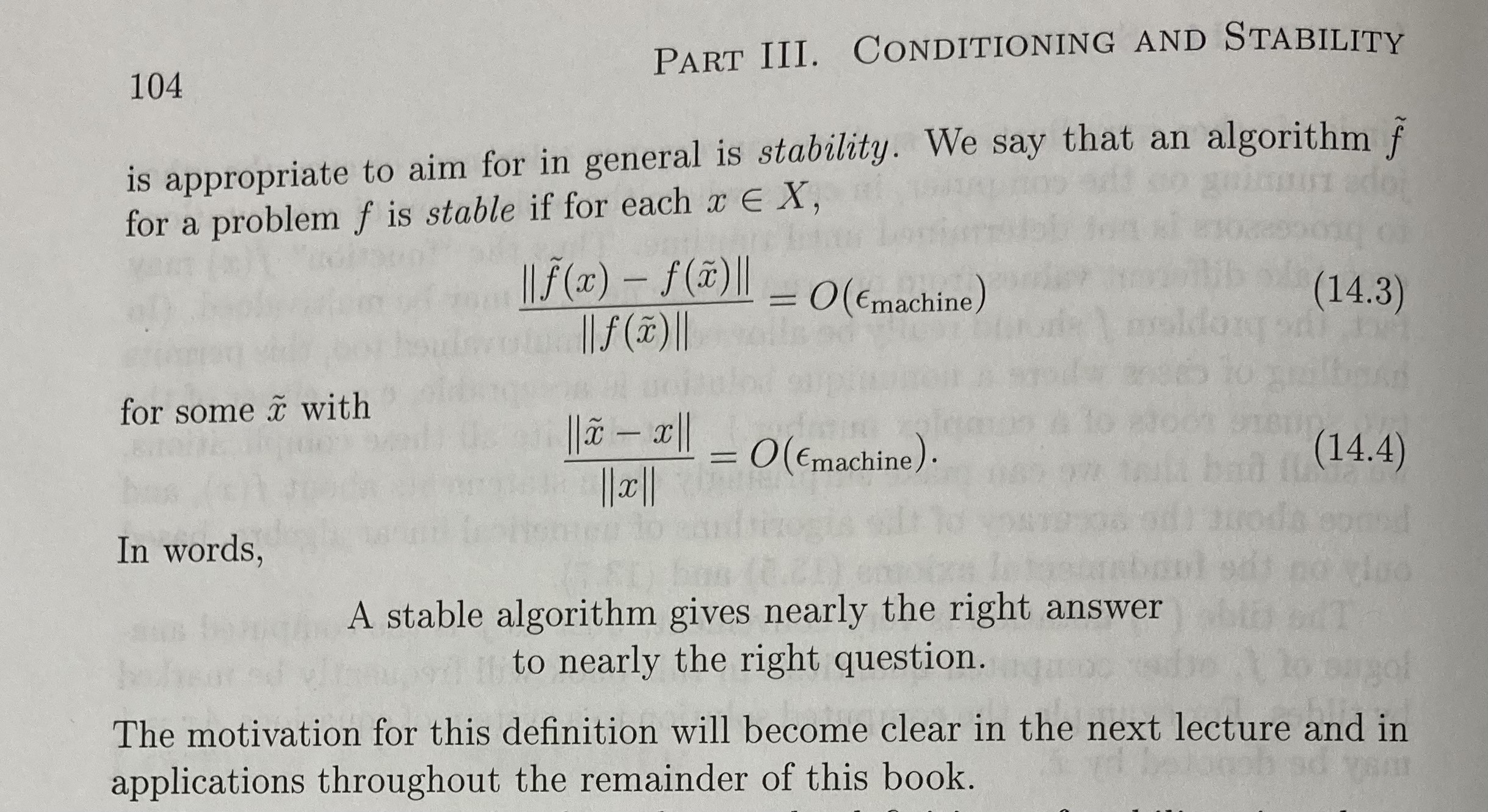 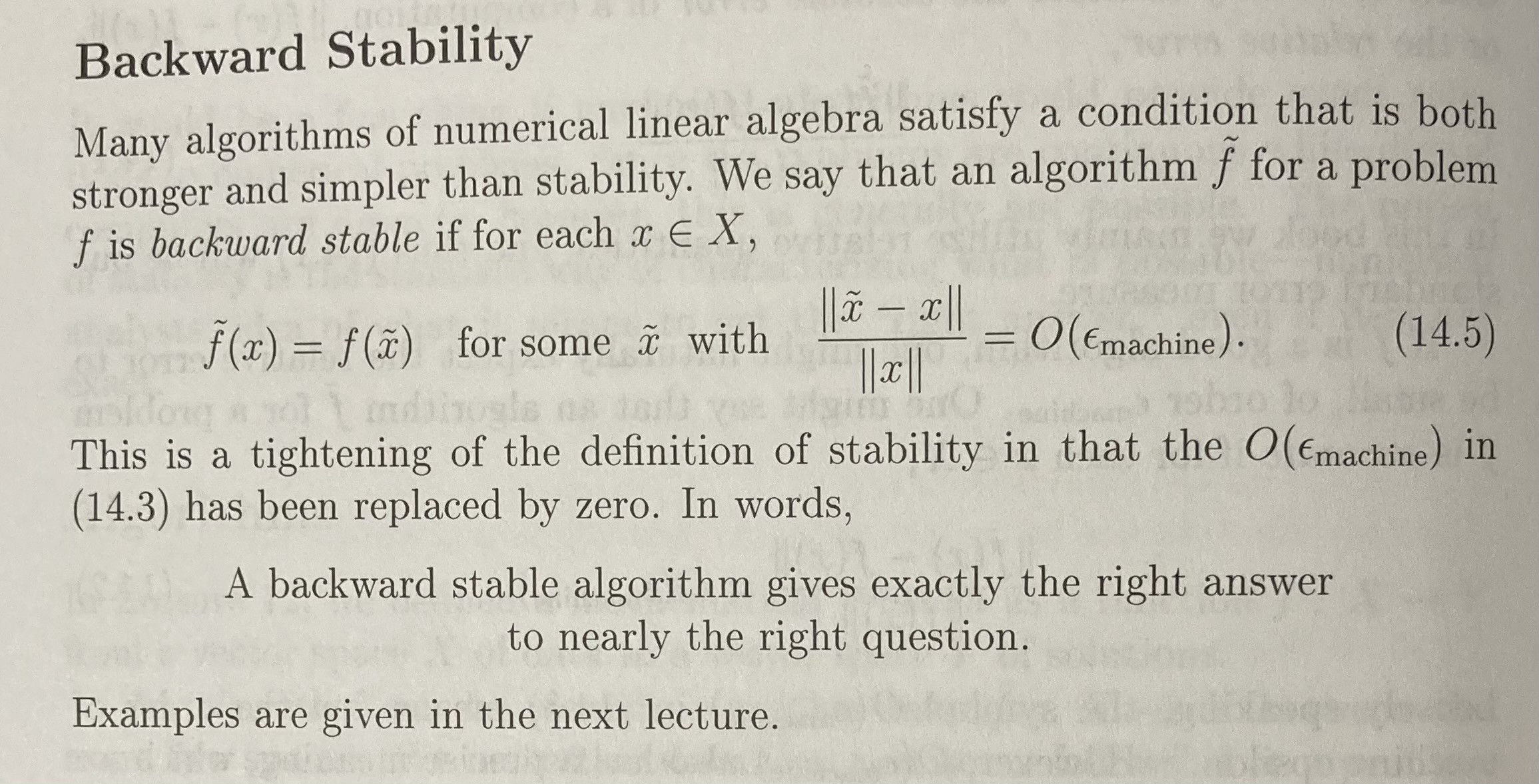 As hardmath mentioned in the comments above, if data space $D$ is empty, then the first half of the condition "for all $X\in D$ there exist $Y\in D$ such that $||X-Y||/||X||\approx\epsilon_m$ and $A(X)=P(Y)$" becomes vacuously true. So for backward stability analysis you only need to show the second part. In this case, it is simply proving that the algorithm gives you the best approximation to $e$ in the floating-point system. We can equivalently write this as $A_{l\in\{1,2\}} = \hat{e}$ where $\hat{e} = fl(e)$. (1 will be the left-to-right algorithm, 2 will be the right-to-left algorithm.)

I will partially solve the left-to-right case, because it demonstrates something. After it is demonstrated, right-to-left case is trivial.

As summary, under the assumption that the floating-point multiplication is exact, the first algorithm $A_1$ gives you a result where the error in the result is not optimal. Assuming $\hat{e}$ is the best approximation of $e$ in the floating-point system F, $A_1-\hat{e}\neq 0$ which means that it doesn't satisfy the definition. (You can also prove this rigorously, my explanation above is hand-wavy and experimental. But I was trying to demonstrate the point-of-failure to you -which is kind of obscured in rigorous arguments.)

Not the answer you're looking for? Browse other questions tagged algorithms stability floating-point or ask your own question.

6
Is there a backward stable $\tilde{O}(n \log(1/\epsilon))$ algorithm to factor a complex polynomial?
4
Backward stable projection and normalization of a vector
4
Problem Condition and Algorithm Stability
7
Choosing epsilons
6
Numerical computation of the complex elliptic integral $E(k)$ for medium $|k|$
3
What is a "good enough" method of assigning values to n variables subject to basic bounding constraints while maintaining relative weights?
4
1+x not backwards stable?
7
Numerically stable and fast sum of last K elements in sequence
1
Why is subtraction a stable operation?