I am a beginner in programming. I need to program a mutualism model of two species in python that would solve and graph using the following equations:

I tried to make a similar code as the Lotka-Volterra Model, but it didn't work.

Can anyone advise me on what I'm doing wrong and how I could improve the code?

I changed hence the function and rearranged it a little bit.

This gives me the following plot. (Not sure if this is what you wanted since I dunnot really know the mutualism model. 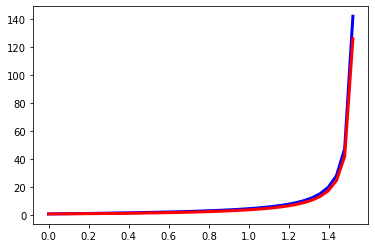 As stated in the comments, we obtain a singularity at t~=1.5 which tends to infinity. Therefore the code only goes a little bit above that value.

Not the answer you're looking for? Browse other questions tagged python ode numerical-modelling or ask your own question.