How to find the smallest ellipse covering a given fraction of a set of points?

I have a set of points $P$ and want to find the ellipse with the smallest area that covers at least a fraction $f$ of these points. How can I do this?

These questions ask the same thing, but folks have only provided approximate answers.

This question asks for the smallest ellipse that bounds all the points ($f=1$).

I don't want an approximate answer. I really do want the smallest ellipse.

You asked for the smallest ellipse. An ellipse so small that its smallestness needs to be italicized. Others have provided answers that identify smallish ellipses, but, as Miracle Max says, "Mostly small is slightly large." Let's find the actual smallest ellipse.

Mathematical Programming as a Technique 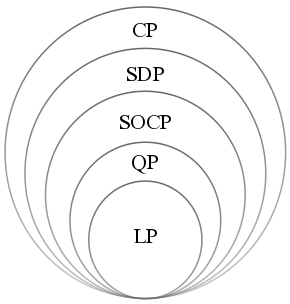 Though this isn't exhaustive, you can think of mathematical programming as a set of nested classes of problem types that trade-off between speed, problem size, and generality. Each class of problems contains the easier, more specific classes as a special case. Linear Programming (LP) is very easy. We know everything about it and can solve problems of millions of variables in short order. Unfortunately, as the name suggests, linear programming is limited to linear equalities and inequalities. Quadratic programming (QP) is harder and the size of the problems we can reasonably solve is smaller. Second-order cone programming (SOCP) is harder still. The most general class of programming for which we have reliable methods is semi-definite programming (SDP). SDPs can be very challenging to solve.

As we use harder and more general techniques, the number of software packages available to solve our problems decreases and their cost increases.

Unfortunately, at first glance, your problem is an SDP.

The matrix determinant above suggests that we're trying to find a PSD matrix $Q$, which is worrisome because this would make our problem SDP---one of the hardest class of problems to solve. Fortunately, through a few tricks we can convert this problem into a second-order cone program (SOCP).

The optimization problem we've developed so far is:

We need to incorporate our data points into this.

To do so, we return to our definition of an ellipsoid $$ \lVert Q\vec{x}+\vec{b}\rVert_2\le1 $$ If we introduce this constraint for each point $\vec{p_i}$, but use the same $Q$ and $\vec{b}$ for each, then we'll be requiring that the same ellipsoid contain all the points and optimizing for the ellipsoid which does this with minimal volume.

This gives us the problem

Including only some of the points

But you didn't want all the points to be contained by the ellipse, only some of them.

The value 1,000 chosen above is arbitrary and represents a "big M constraint". Choosing this value wisely can impact the speed of the solution, as explained here and here.

The SOCP class of problems is efficient to solve because the problems are convex, which means that any local minimum (or maximum) is also the global minimum or maximum.

Introducing the binary variable above destroyed the convexity of this problem and brought us into the world of mixed integer programming where there are no algorithms that can solve all classes of problems efficiently. Therefore, our expectation is that for large problem sizes it will be challenging to find exact answers, even if we can find suitable answers quickly.

In actuality, the situation is even more challenging: we're working with a mixed-integer second-order cone program.

Consulting the chart of solvers above indicates a limited set of solvers that can handle such problems: CPLEX, Gurobi, MOSEK, SCIP, and XPRESS. By process of elimination, we need to use XPRESS.

A working implementation is below using XPRESS as a solver and cvxpy as a domain-specific language.

Exploring the entire space of binary variables would take $O(2^N)$ time, so we know that modest increases in $N$ can have, in the worst case, an exponentially detrimental effect on wall-time. The reason we're able to explore spaces of $N=100$ or so is that our MISOCP solver (XPRESS) is able to cleverly prove that certain combinations of points will never be optimal and, therefore, doesn't have to explore them.

The number of points included might have a U-shaped effect on wall-time. If we call the number of points we want included in the ellipse $k$, then there are $$ {n \choose x} = \frac{n!}{r!(n-r)!} $$ unique combinations to check. This equation has a parabolic shape 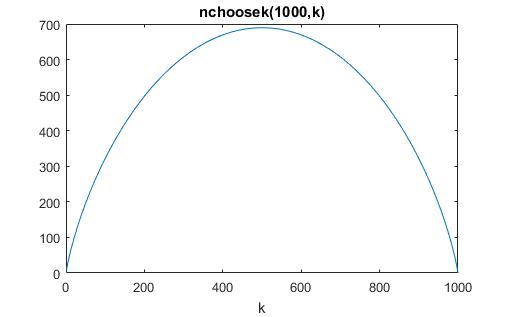 implying that the most challenging problems will be for intermediate numbers of points include in the ellipse.

As a quick sanity check we generate a dispersed cloud of data with a large number of points near the middle. Any ellipse excluding a small enough number of points should include the dense region. This is implemented in the sanity_check() function below. 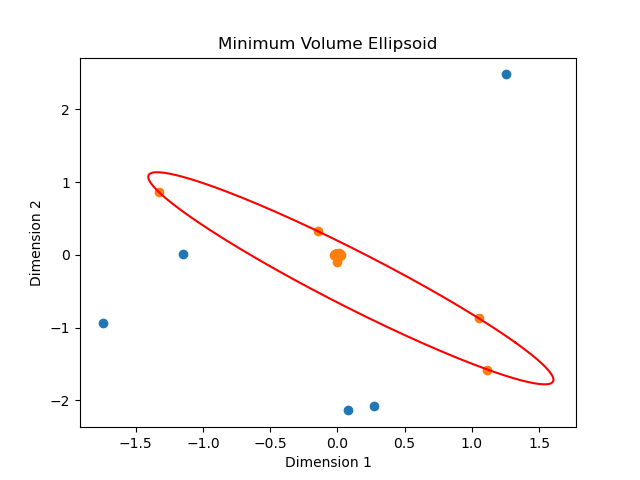 We can then run for various problem sizes: 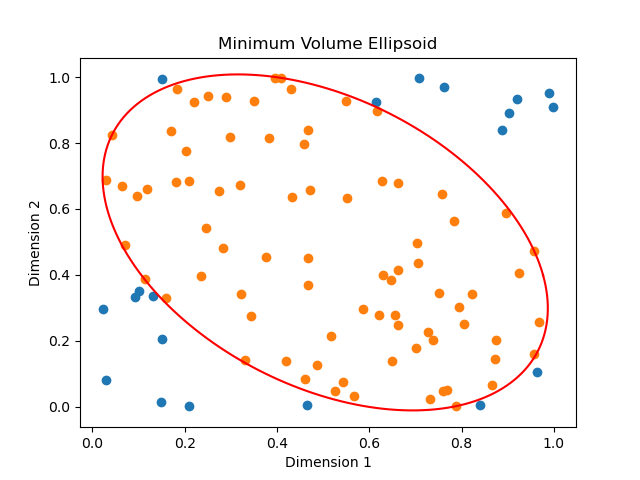 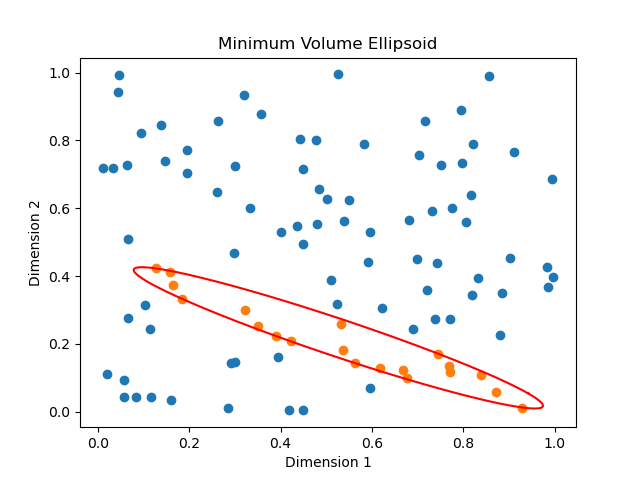 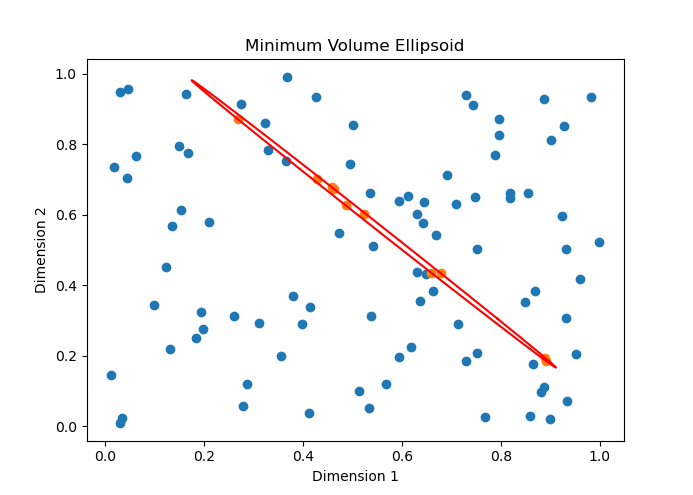 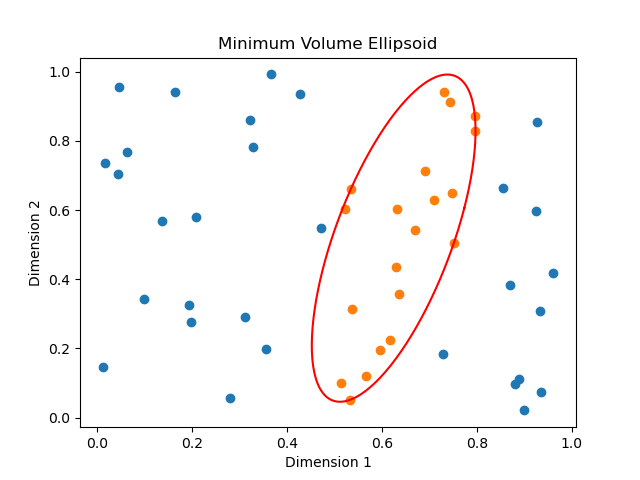 this roughly matches the intuition we developed with the theory, though it's surprising that (100,80) takes much less time than (100,20) despite the number of combinations to be considered being nominally equal. This indicates that if we want to understand the problem better, we'll need to think harder about the theory.

If we look at the diagnostic output of the solver, we see:

This suggests a general strategy to approach computationally intensive problems like this: determine what level of optimality guarantee you need and request your solver stop when it finds that.

Implementation (for real this time)

12
How do I find the minimum-area ellipse that encloses a set of points?

8
How to get all intersections between two simple polygons in O(n+k)
6
Concave polygon 'hull' finding
3
Equal Area Sampling on Curved Surface:
2
optimization (using python) how to find the most suitable solver?
3
How do I find the smallest set of elements that covers a given shape?
1
Constraint programming problem with conditional constraints and some unknown indicator variables
12
How do I find the minimum-area ellipse that encloses a set of points?