How to properly apply non-homogeneous Dirichlet boundary conditions with FEM?

Is there any justification for setting the BC like this and if so, what would the proper norm be?

There is mathematical justification for setting Dirichlet boundary degrees of freedom to a value. However, you should adjust your variational form accordingly. If you are looking at a general problem, say:

Instead we can write $u = v + g$ where $v\in\mathcal{V}$ and $g$ is the Dirichlet condition. Then the variational form becomes

In a finite element code, you can form your element stiffness matrix as if there were no boundary conditions. Then you take the column of the local matrix which corresponds to the Dirichlet boundary condition, scale it by the coefficient you want to enforce, and subtract it from the right-hand-side. This is the discrete form of what I wrote above, $-a(g,w)$. Then you zero out that column and the corresponding Dirichlet row, placing a 1 in the diagonal and the coefficient you wish to enforce. This decouples the equation from the system and yet sets the value you wish to enforce.

I recommend The Finite Element Method: Linear Static and Dynamic Finite Element Analysis, by Tom Hughes. He has an expanded discussion of this issue starting on page 8.

To add up to Nathan's great answer with the variational reasoning, one often needs algorithmic details when implementing finite elements. For example, 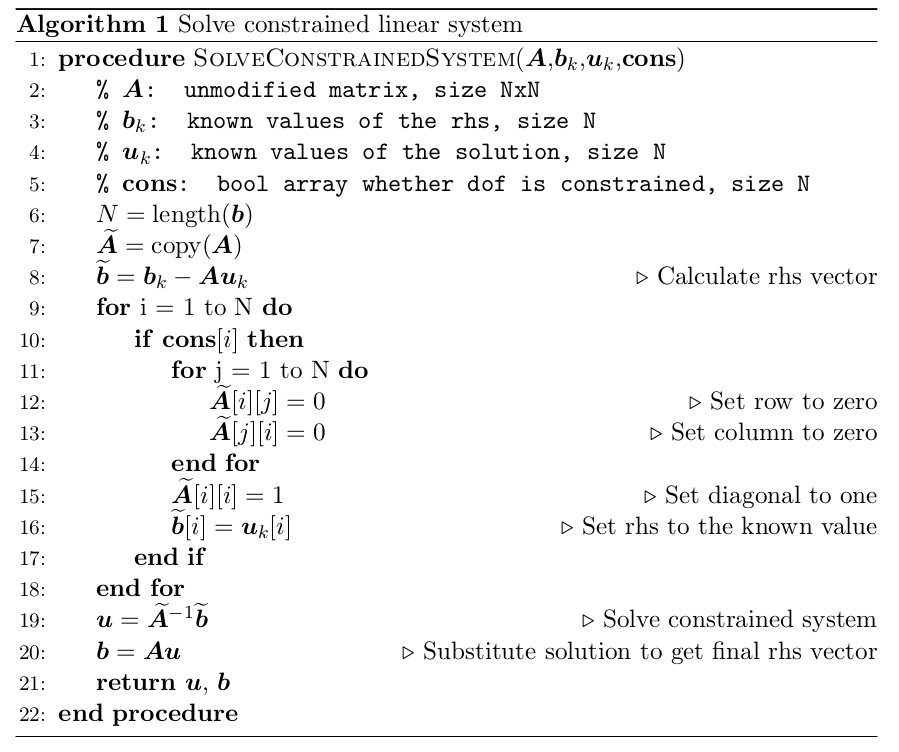 I also have a more detailed explanation on the subject in my personal notes. Please see the chapter "Constrained Linear Systems".

Not the answer you're looking for? Browse other questions tagged pde finite-element boundary-conditions or ask your own question.