I'm working on a 2D fluid sim using vortex particles/"vortons" as described in Fluid Simulation for Video Games. Which I think is the same things as the "discrete vortex method". Basically you represent the fluid with a collection of particles with defined vorticity, and calculate the fluid velocity at a point by summing up the induced velocities of all the vortons using Biot–Savart's law (eg: $v = \frac{\omega \times (p_2-p_1)}{4\pi r^3}$, where $p_2-p_1$ is the difference in position between the sample point and the vorton, $w$ is the vorticity (a vector quantity in 3D), and $r$ is the Euclidean distance between the vorton and the sample point).

I'm trying to introduce a box in to the fluid and have it move back and forth and influence the fluid. Which means taking in to account the no-slip and no-through boundary conditions for the box. (That is, having the relative fluid velocity be 0 right at the box's boundary).

This almost works, but I've noticed that the solution I get back is highly dependent on the exact layout of sample points and vortons. 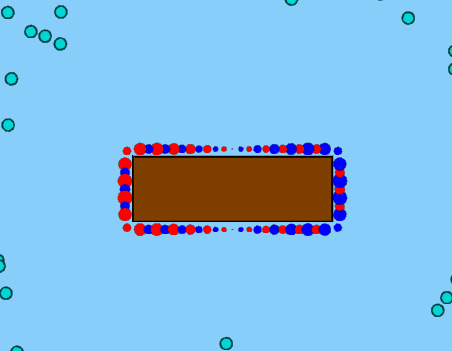 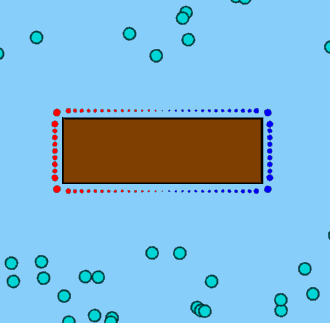 I think the second pic is what I actually want. I also think that the two different solutions imply that the system of equations I'm using is too underconstrained. Adding additional sample points sometimes helps, sometimes doesn't.

Are there any other boundary conditions I could add that would help me get the results I'm after? Intuitively I'm not doing anything to take in to account how strongly the fluid is disturbed at some given distance from the box. I'm thinking maybe I could add in conditions for the boundary layer limit. But I'm not sure exactly what that would look like.

Alternatively, is there any relevant literature I could look at for how vortex particle based fluid sims handle these sorts of boundary conditions?

Is the system you're trying to solve singular? Or at least ill-conditioned?

I would try adding some regularization to the system, e.g. if you have an energy formulation, add a small multiple of $\Sigma||v_i||^2$. I think this corresponds to adding a $\lambda I$ term to the matrix you're solving. That should drive the system towards the second configuration.

Not the answer you're looking for? Browse other questions tagged fluid-dynamics simulation or ask your own question.

3
What numerical methods are recommendable for simulating two phase immiscible fluid flow through a pipe with high capillary pressure?
2
Detect rigid body motions in a cloud of points
1
Convergence Criteria for Two Fluid Flow Solver
1
Outlet boundary conditions in lattice Boltzmann method
2
In practice, what are the most useful ways to visualize 2d fluid flow, to tell what is happening in the simulation? Esp for verification and debugging
1
Imposing pressure variation instead of Dirichlet boundary conditions on Finite Element Method