Flipping the kernel in 2D convolution?

SEE: http://www.songho.ca/dsp/convolution/convolution2d_example.html "First, flip the kernel, which is the shaded box, in both horizontal and vertical direction"

Why do we need to flip the kernel in 2D convolution in the first place? So, why can't we leave it unflipped?

The convolution operation is defined by this flip, e.g. for 1D

If there was no flipping it would be called cross-correlation, in 1D this is

You don't have to do the flipping if the resulting kernel is no different, e.g. an isometric filter.

One reason convolution is used instead of cross-correlation is that convolution is a simple multiplication in the fourier domain, e.g. from wikipedia

where $k$ is a constant depending on the normalisation constant of the Fourier transform used.

Proof can be found on wikipedia here:

Cross-correlation (no flipping) can also be done in the Fourier domain, e.g.

Another nice property of convolution is that the operation is commutative, e.g.

whereas for cross-correlation it is not.

Even nicer is that convolution of a signal with a dirac delta returns the original signal, shifted, where as for cross-correlation a flipped, shifted, signal is returned.

Although it is just a simple flip, convolution and cross-correlation can give quite different results, e.g.: 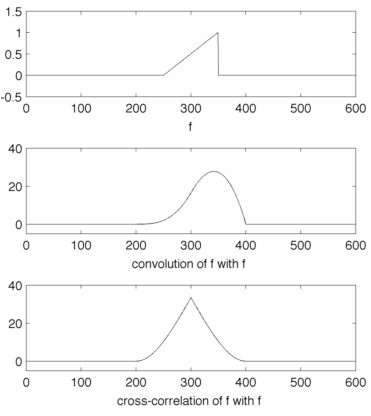 Not the answer you're looking for? Browse other questions tagged image-processing or ask your own question.

0
How do convolution matrices work?
4
Mathematical way to represent a image kernel?
8
Computational Complexity of 2D Convolution
0
How can we compute the exact value of some rotational symmetric n-by-n convolution kernel
4
What are the numerical methods for testing for dissimiliarity between image based probability histograms?
1
Filter coefficients for convolutional inpainting
0
How can I compute the gradient of the noiseless image given by the compass operator?