I want to solve job assignment problem using Hungarian algorithm of Kuhn and Munkres in case when matrix is not square. Namely we have more jobs than workers. In this case adding additional row is recommended to make matrix square. For example in the following link. 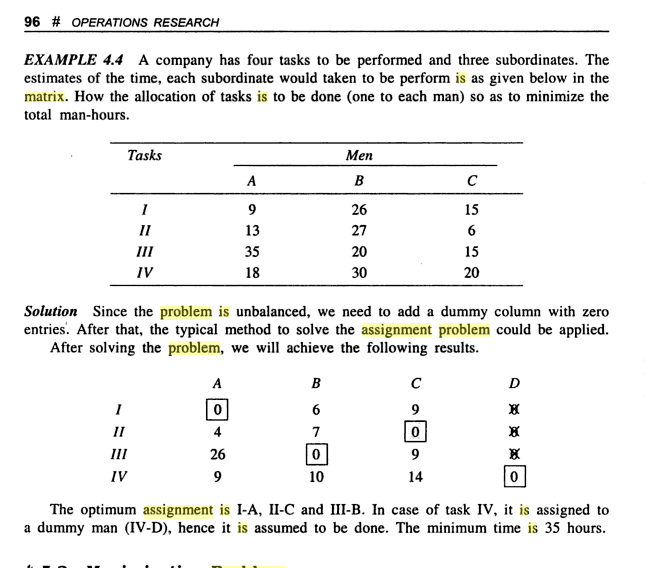 And here task IV is assumed to be done. But in real we do not have man D. Who will actually do task IV? Can someone explain this phenomena?

In general I want to complete all tasks by loading workers uniformly and get maximum cost. So how to implement this task by using job assignment algorithm above?

Purpose of introducing a dummy variable:

So you introduce a dummy person. Now do the assignments using standard Hungarian Algorithm. So three workers get three jobs such that net man-hours are minimum. And outsource the remaining job (in your case, job no. $IV$).

This solution helps choosing those three jobs, which can be done in the fastest way in your firm.

Answers to your questions

1) No. Nobody in your firm will do job $IV$. The Hungarian algorithm just helped you to identify which three jobs to accept and how to assign them.

Some more references as follows.

The logic behind the Hungarian algorithm is discussed in this video nicely. While the flowchart along with explanation for the algorithm is given in this link.

Job Assignment Problem is a kind of Pure Binary Linear Problem. Therefore, you can solve this problem by using BLP.

Not the answer you're looking for? Browse other questions tagged linear-programming or ask your own question.