Ask Question
Asked 8 years, 1 month ago
Active 8 years, 1 month ago
Viewed 438 times
2
$\begingroup$
It's difficult to tell what is being asked here. This question is ambiguous, vague, incomplete, overly broad, or rhetorical and cannot be reasonably answered in its current form. For help clarifying this question so that it can be reopened, visit the help center.
Closed 8 years ago.

I am doing a small project at school. I have done my code implementations in CUDA and did some performance measurements with real values, i.e. running the program with different number of threads, changing the size of the problem, changing both, etc.

The results of (time, speedup) look really nice. But then I was asked to do some theoretical analysis of the algorithms, specifically do a prediction of the time it will take my implementation to run as the number of threads increases. The problem was that I received some documents where they use "Timing diagrams" to try to model this, but this approach was for problems solved using MPI and I'm being asked to use exactly the same stuff to create a prediction model for CUDA. Is it possible to do this?

How can I do a prediction of how a given CUDA program (kernel) will run as I increase the number of threads used for computation? Say that my GPU has 240 cuda cores, now for sake of simplicity I am taking that if I launch a kernel with one thread that kernel will use only 1 core, if I launch 4 threads it'll use 4 cores up to a limit of 240 in that case when I launch 500 threads there won't be no more than 240 cores in use. It is highly likely that this is somehow wrong but It's something to start with.

The very first problem was how to simulate a sequential running on the GPU in CUDA. As mentioned before what I did was launch a kernel with only one block and one thread, the result was what I expected as it turned out that the kernel ran slower. Then increasing the number of threads launched reduced the running time so I was getting benefit from the parallel architecture of the GPU. Now, the key question is launching K threads in CUDA, can I be sure that the number of cores used in the GPU equals the number of K threads? Somehow this is true because of what I said before. 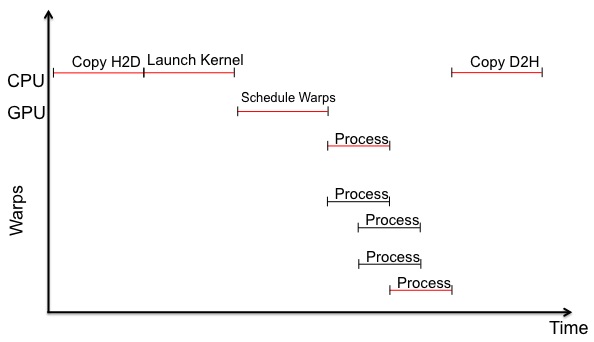 The time of (1) and (4) can be straight forward computed: I know the GPU is connected to the CPU via PCI-Express 2nd gen and knowing the size of the problem I can know the actual time of transfers. Good :)

The time of (2) is hardware dependent, but for what I've been reading it takes around 60 to 65 ms.

Finally (3) the hardest part to predict is the actual running time of the computation (kernel runtime for a given number of threads). The way I modeled this was Tprocessing = Tcomputation + Tmemory

Tcomputation : number of cycles one thread does to compute 1 pixel of the set. The key question here is How to count the number of cycles? I naively counted the number of sums and multiplications and then multiplied it by the cycles each of them takes according to the architecture of the GPU. I am completely uncertain about this.

Tmemory : number of cycles one thread takes to go to global memory to read/write. From various references (including Udacity course on GPU) is no average 500 cycles.

Then we know the frequency at which the GPU clock works and summing all I would have an upper bound of the time it will take my program to run.

So basically everything is based on the idea that if I run one thread only one CUDA core is used, if I run ten threads then ten CUDA cores are used. Then I can predict what will is likely to happen if we have a GPU with 2048 CUDA cores as the GTX Titan.

I test my model with the Mandelbrot Set and well my timing was much bigger than the actual one, so something is missing.

Browse other questions tagged parallel-computing performance gpu cuda or ask your own question.

6
Starting multiple processes from a single PBS job and distributing them on the free cluster nodes
5
Effects of memory speed/architecture on Pardiso scaling
12
Parallel (GPU) algorithms for asynchronous cellular automata
4
Efficient Successive Over Relaxation using Cuda?
3
Why am I not seeing faster neural network training after upgrading to a vastly better GPU?
0
CPU and GPU influence on task parallel execution performance
0
Can I convert CUDA core to CPU core and use it as cpu core while running any program?
6
How to properly calculate CPU and GPU FLOPS performance?