What are the basic principles behind generating a moving mesh?

For example, in conservative form the equation is,

How should the equidistribution problem for the moving mesh be solved (possibly with De Boor's algorithm or other approach)? I wish to implement this myself in Python so if your answer can be readily translated into code all the better!

Old question prior to bounty

A bit of background about the specifics of the problem. I am simulating a 1D coupled system of equation,

The set of equations describe a two species advection-diffusion problem where the third equation couples to the other two. The solution change rapidly near the centre of my grid, see below (these are illustration not calculations), 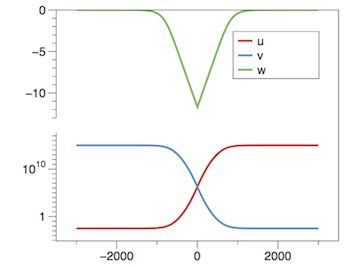 Notice that log scale on the lower graph, the solutions for $u$ and $v$ vary over orders of magnitude. On the upper graph ($w$) there is a discontinuity at the centre. I am solving the above system with an adaptive upwind where the discretization can adapt from central to upwind dominated depending on local value of Péclet number. I am solving the system implicitly with trapezoidal integration in time ("Crank-Nicolson").

I am interested in applying an adaptive grid to this problem. I think it is important because otherwise details of the shape peak (the $w$) parameter could be lost. Unlike this question, I would like to apply, a hopefully simply, algorithm for mesh generation.

As this is an advection-diffusion problem, one could imagine an adaptive mesh scheme based on the fluxes of $u$ and $v$ at the cell boundaries. As this would indicate where the value is changing rapidly. The peak of the $w$ also corresponds to the where the flux are the largest.

For the computations of newer configurations dependence on best practice guidelines for mesh generation and previous experience leaves the door open to large amounts of numerical error. Grid adaptation methods can produce substantial improvements in solution quality and promises better results because no limitations exist that define the limit on grid resolution that can be attained.

The $h$ method involves automatic refinement or coarsening of the spatial mesh based on a posteriori error estimates or error indicators.

Very much popular method of grid adaptation in finite element approach rather than finite volume or finite element method. It reduces the error in the solution by enrichment of the polynomial of interpolating functions with the same geometric element order.Here no new mesh, geometry to be calculated and another advantage of this method is that it can better approximate irregular or curved boundaries with less sensitivity to aspect ratio and skew. Because of the this its very famous in structural application.

$1. Feature-based-adaptation$ Feature based approximately largely used approach of grid adaptation employs feature of solution as driving force for grid adaptation. These often uses features of the solution such as solution gradients and solution curvature. Flow regions that have large solution gradients are resolved with more points and regions of minimal significance are coarsened. This leads to refinement of the region which is physically specific such as boundary layer, shocks,separation lines, stagnation points, etc. In some cases, gradient-based refinement can actually increase the solution error so there are some issues regarding feature based adaptation like robustness and others.

$3.Adjoint-based-adaptation$ Next promising approach is the adjoint approach. Its very good in estimating the local contribution of each cell or element to the discretization error in any solution functionals of interest such as lift, drag, and moments. So it is useful in targeted grid adaptation as per requirement of the solution so thats its also called as goal oriented adaptation.

I was (still am) looking for good answers for this. I work with multi-level adaptive grids where I use some sort of criterion for refinement. Folks doing FEM enjoy, rather cheap (computationally), rigorous error estimates that they use as refinement criterion. For us doing FDM/FVM, I have not had luck finding any such estimates.

In this context, if you want to be rigorous about refinement, i.e refine based on some estimation of the actual error, your (almost) only choice is Richardson Extrapolation. This is what was, for instance, used by Berger and Oliger (1984) for their block-structured, AMR hyperbolic solver. The methodology is general in the sense that you can use Richardson Extrapolation for virtually any problem. The only issue with it is that it is expensive, especially for transient problems.

Other than Richardson Extrapolation, all other criterion (in my humble opinion) are just ad hoc. Yes you can set a certain threshold on a "quantity of interest" and refine based on that. You could use fluxes or derivatives of some quantity to alert some large gradient and use that. Or if you are tracking an interface, you could refine based on how close you are to the interface. All of these are very cheap, of course, but there is nothing rigorous about them.

As for interpolation between grids, you generally need something that is at least as accurate as you solver. Sometimes it is possible to build interpolations that satisfy certain properties, e.g. conserve mass or are convex thus do not introduce new extrema. I have noted that this last property is sometimes very important to the stability of the overall scheme.

If it is indeed 1D then you probably won't need any adaptive mesh here, for such a simple problem you can probably resolve all you need with a static grid, with a computing power of a modern workstation. But it is a perfectly reasonable strategy, in the process of time-integration, to identify periodically areas where the numerical resolution is stressed, add grid points there (and remove grid points from over-resolved areas), and interpolate to the new grid. But this should not be done too frequently because interpolation can be costly, and it would add numerical error in the overall calculation.

Not the answer you're looking for? Browse other questions tagged finite-difference adaptive-mesh-refinement advection-diffusion or ask your own question.

6
Trouble implementing Neumann boundary conditions because the ghost points cannot be eliminated
5
Implementing an adaptive discretisation (upwind/central hybrid) for the advection-diffusion equation on a non-uniform mesh
7
Are we free to choose the position of ghost cells on a non-uniform finite-volume mesh?
4
Conservation of Mass in 1D Advection-Diffusion Equation
0
Adaptive mesh refinement basic conceptual problem
4
transverse component for multidimensional advection in method of lines
1
Simulating advection - diffusion problem in a network of 1D pipe