How can I reduce the communication bottleneck of a parallel explicit finite difference scheme?

Suppose i was trying to solve a parabolic PDE (heat equation) on a rectangular domain using an explicit finite difference scheme. I am storing my solution vector in a matrix form (because it closely resembles the shape of the domain). I know that I can break the matrix into rectangular blocks and send information across the boundaries of each block (as needed) using ghost points. However, when I use a fine grid, the processors have to send a lot of information between them, and this seems to slow down the overall performance. Is there anything that I can do to increase the scalability of the algorithm? Is there a theoretical limit to how much improvement I can expect through the use of ghost points?

To improve the efficiency, it is worth considering:

Tying this question into a previous one ( When analyzing a parallel algorithm, how do you take communication costs into account? ) on modeling parallel efficiency, let's create a simple model where we take a look at how the computation behaves as we change the number of processors.

Let's say we have a grid of size $N^d$, and $P$ processors -- we'll assume that $P$ is a perfect square/cube/whatever and that $N$ is evenly divided by $P^{1/d}$ (if it isn't, it just introduces some modest load imbalance).

Let's say the actual explicit computation involves $n_\mathrm{ops}$ operations (memory, or floating point) operations per zone, each of which has (time) cost $c_\mathrm{ops}$. Further, let's model the time spent to perform a communication with a latency and a bandwidth; it takes a message of even zero size some time $l$ to go fron node to node, and there is in addition a finite bandwidth $b$ to the network, so that a message of size $s$ takes time $l + s/b$. (In practice, things are usually a bit more complicated than this; local neighbours might be on-node, for instance, and splitting bandwidth between cores; and distant neighbours might not even be on the same switch. So you might need to use something other than the nominal network parameters. Still, this is a sensible start.)

(Further, explicit parabolic methods generally for stability require timesteps that scale as $\Delta x^{-2}$, so that we would need to take a number of timesteps that scales as $N^2$ to reach a given physical elapsed time. That's relevant for how the computational cost scales wtih $N$, but not parallel scalability, so we won't need this here.)

Let's look at the latency-dominated scenario; that is, you're sending small messages, so that the time for communications is dominated just by the number of messages you're sending. (You would always get to this point eventually, as the message size, as we'll see, goes down with number of processors.) In this case, $$ \begin{eqnarray*} \frac{t_\mathrm{comm}}{t_\mathrm{comp}} & = & \frac{P}{N^d n_\mathrm{ops} c_\mathrm{ops}} 2^d l \\ & \propto & P / N^d \end{eqnarray*} $$ Here the relative parallel overhead goes linearly as you add more processors -- this is not because communications is getting more expensive, but because the computational cost is going down linearly in P as we're adding more processors and each only has to do $N^d/P$ work.

In the bandwidth dominated case -- for very large messages or very slow networks -- you'd instead have: $$ \begin{eqnarray*} \frac{t_\mathrm{comm}}{t_\mathrm{comp}} & = & \frac{P}{N^d n_\mathrm{ops} c_\mathrm{ops}} 2^d \frac{n_g N^{d-1}}{b P^{(d-1)/d}} \\ & \propto & P^{1/d} / N \end{eqnarray*} $$ In this regime -- which you are likely in at the beginning (especially in 3d) with comparitively large messages, especially on ethernet -- the overhead is much more modest, scaling as the cube root of P (in 3d), because as you increase the number of processes, you are also reducing the size of the messages you have to send because the grid is more finely divided and you have less overlap with your neighbouring processor.

It's fun to put some numbers in; let's say we do a weak scaling study in 3D, with $N^3/P$ fixed at $256^3$, and with 1 guardcell of double precision numbers, with gigabit ethernet so say latency is 100 microseconds and 1/bandwidth is about 0.06 microseconds/double. Let's say you have to do 100 operations per zone, with each operation taking 1 nanoseconds. 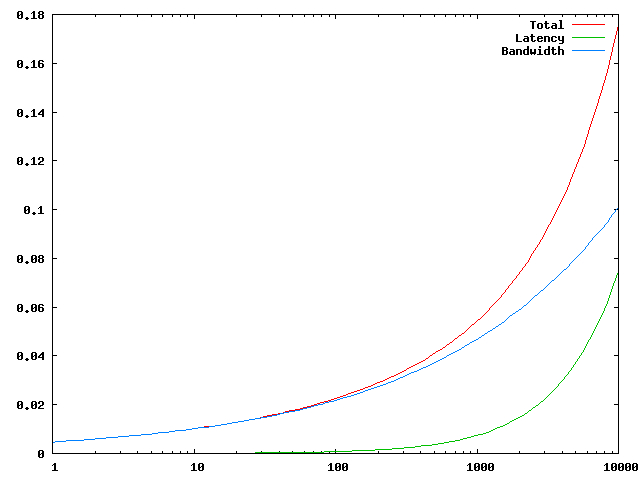 This is plotted above; obviously, treating things continuously when we've assumed that P is a perfect cube and divides N is problematic, but it still gives you a picture of what's going on. For the first while, bandwidth dominates your communication overhead, but eventualy you switch over to latency. Here, with the relative overhead increasing with $P$ (again, due to the fact that computation is decreasing), you definitely do not get a constant efficiency, but one which falls with $P$.

Note too here that in such a code there is often some kind of reduction operation at the end of each step; that isn't being modelled here. Neither is I/O of any sort.

Not the answer you're looking for? Browse other questions tagged pde parallel-computing finite-difference explicit-methods or ask your own question.

7
When analyzing a parallel algorithm, how do you take communication costs into account?