Is it possible to solve nonlinear PDEs without using Newton-Raphson iteration?

I am trying to understand some results and would appreciate some general comments on tackling nonlinear problems.

I wish to apply a implicit scheme because I require stability and unrestricted time step. For this purpose I am using the $\theta$-method, (note that $\theta=1$ gives a fully implicit scheme and $\theta=0.5$ gives the trapezoidal or "Crank-Nicolson" scheme),

However, for nonlinear problems this cannot be done because the equation cannot be written in a linear form.

To get around this problem I have been exploring two numerical approaches,

The full $\theta$-method equation can be solved using the a Newton-Raphson iteration to find the future solution variable. Where $k$ is the iteration index ($k\geq0$) and $A^{n}$ is the Jacobian matrix of $F(w^n)$. Here I use the symbols $\nu^{k}$ for iteration variables such that they are distinguished from solution of the equation at a real time point $u^n$. This is actually a modified Newton solver because the Jacobian is not updated with every iteration. 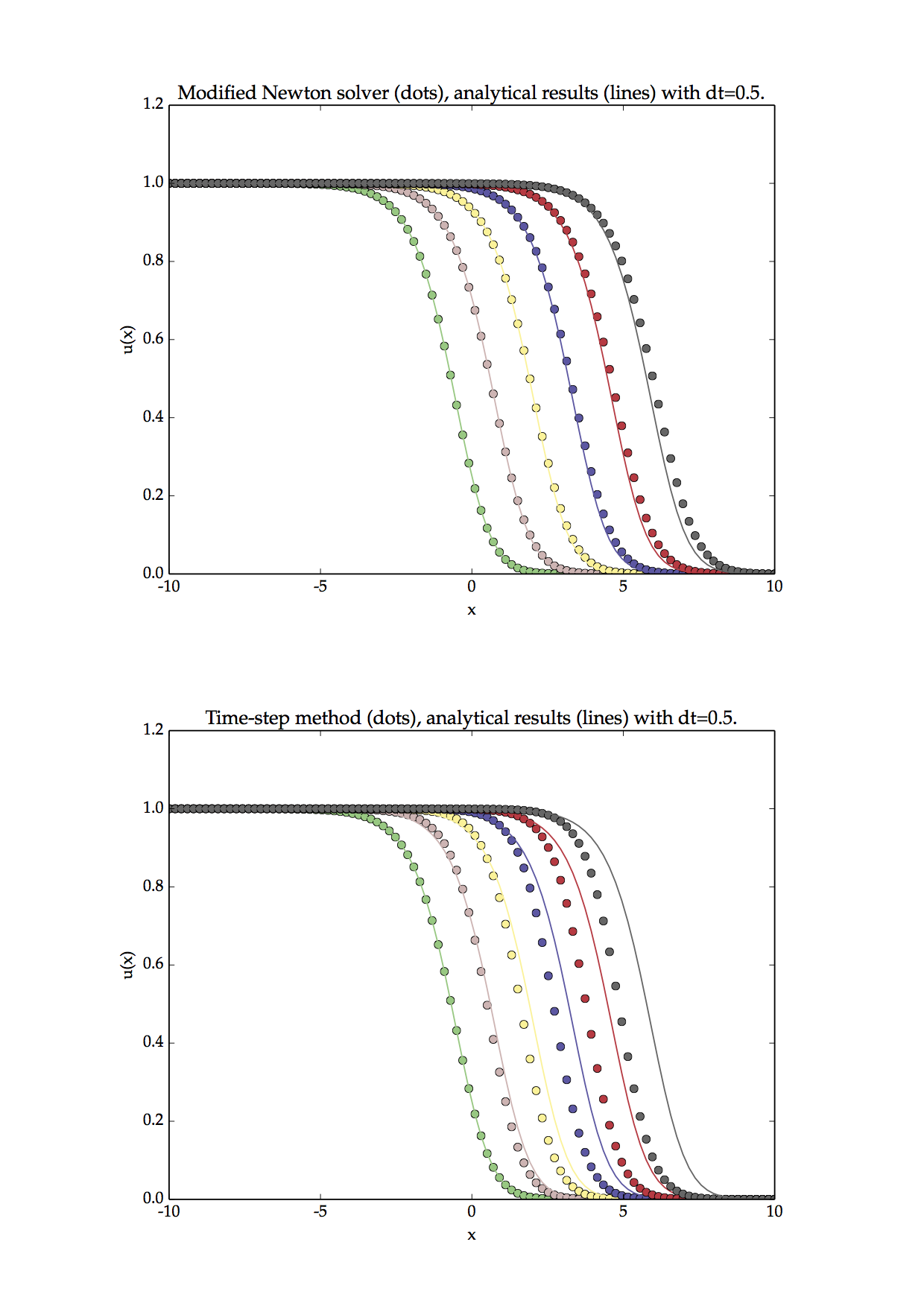 The results above are calculated for a reasonably large time step and they show the difference between the time stepping approach and a full Newton iteration solver.

or a combination of both ('IMEX', see @Jed Brown's answer) single-step time-stepping schemes.

In this setup, the Newton method simply is an approach to solve the possibly nonlinear in $u_h^{n+1}$ systems resulting from $(*)$.

And my answers base on results from the numerical analysis of single-step methods.

Some more remarks and the final answer:

So, my answer is: Yes, you can solve nonlinear PDEs without Newton's method. You can use explicit schemes, 'IMEX' schemes, or socalled linearly implicit methods (e.g. the Rosenbrock methods). Also, you can employ other approaches to solve the systems from $(*)$ like fixed-point iteration or, in particular cases, algebraic solvers.

If you only want second order accuracy and no embedded error estimation, chances are that you'll be happy with Strang splitting: half-step of reaction, full step of diffusion, half step of reaction.

Reaction-diffusion, even with linear reaction, is famous for demonstrating splitting error. Indeed, it can be much worse, including "converging" to incorrect steady-states, mistaking steady-states for limit cycles, confuse stable and unstable configurations, and more. See Ropp, Shadid, and Ober (2004) and Knoll, Chacon, Margolin, and Mousseau (2003) for the computational physicists perspective on this. For the mathematician's analysis in terms of order conditions, see Hairer and Wanner's book on stiff ODE (Rosenbrock-W methods are a linearly-implicit IMEX method), Kennedy and Carpenter (2003) for nonlinearly-implicit IMEX "additive" Runge-Kutta, and Emil Constantinescu's page for more recent IMEX methods.

In general, IMEX methods have more order conditions than the underlying implicit and explicit methods alone. IMEX method pairs can be designed with desired linear and nonlinear stability and so that they satisfy all order conditions up to the design order of the method. Satisfying all order conditions will keep the asymptotic splitting error of the same scale as the error in each scheme separately. It says nothing about the pre-asymptotic regime (large time steps/low accuracy requirement), but it is rarely more stringent than resolution of each part separately. In any case, the splitting error is visible to the embedded error estimator (when using adaptive error control).

PETSc has many IMEX methods of the Rosenbrock-W and additive Runge-Kutta families, and will have extrapolation and linear multistep IMEX in our next release.

Disclaimer: I wrote much of the PETSc time integration support and collaborate with Emil (linked above).