I get a distance map output after using a Fast Marching Method. The PDE involved is the Eikonal equation which take the form : $$\begin{cases} c(x).|\nabla u| =1\\ u(x) =\phi(x) \end{cases} $$ where c is a speed function and u the unknown distance/time we compute. Below an example of a 2D distance map (in blue the inital points and in red the further points). 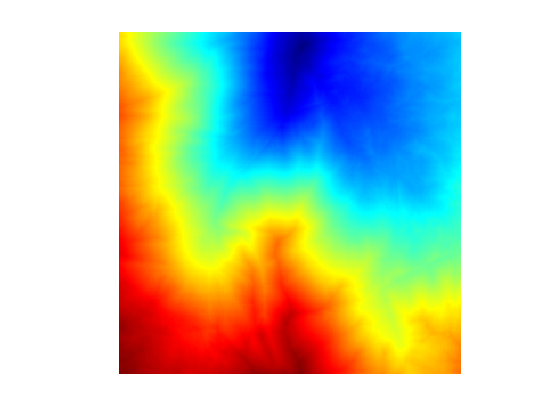 Given 2 points in the map I would like to show a simple/shortest path between them. I have tried using a naive algorithm which is not very good since I can have complicated problems with obstacles, multiple sources, different speeds.

My data structure is an uni dimensional row major array (I am coding in C) representing distance values in a 2D regular grid. I think gradient descent might be a good solution but I have difficulties finding a simple algorithm. Thank you.

Edit I join an article Application of the fast marching method for outdoor motion planning in robotics (starting page 12) which use a gradient descent in order to compute that. I have already seen that other papers but I cannot see how it works.

Update I am trying to add a backtracking algorithm to my naïve one but I have troubles putting it in applications. I feel like I am doing a brute force and this is not what I want to do. If someone has an idea on how to change my naive algorithm.

Your algorithm can be seen as a space-discrete variant of this, but it will only ever compute the shortest path from B to the "bluest" point in your distance map -- if that is not A, it will not terminate in general.

(Note that $T$ depends on you initial point $x_0$, and has to be recomputed for each initial point. There are more efficient methods for computing all possible pairs of geodesics at once; this is sometimes referred to all-to-all geodesics, see, e.g., http://www.ias-iss.org/ojs/IAS/article/viewFile/891/789.)

This can be solved using some variant of Dijkstra's algorithm, such as the A* algorithm.

Not the answer you're looking for? Browse other questions tagged algorithms finite-difference or ask your own question.

19
How do I write dimensionally agnostic code?
6
Concave polygon 'hull' finding
2
Finding two shortest path that are 'distant' in the graph
4
Question on speed and accuracy comparisons of different 2D curve fitting methods
1
How to compute WENO-reconstructed flux in local characteristic field?
0
Finding a shortest path in a graph