To get rid of this limitation, I found that the higher $n$ wavefunctions can be achieved by using 'raising operator', and then repeatedly acting it on the previous wavefunction to get the next wavefunction, and so on.

I wrote a Matlab program for $a^{\dagger}$ (shown below) using the 2nd method, i.e., Fourier transform. After evaluation of states greater than $n=10$, the program is becoming unstable and becoming even worse for higher $n$ (instability plot is shown below in the link). The same issue had appeared when I used the finite-difference method to evaluate the derivative (code is not attached).

Solution to the issue or an alternate approach to the problem will be helpful.

UPDATE: I'm also interested to know the reason for the development of instability while using 'fft' in the code. 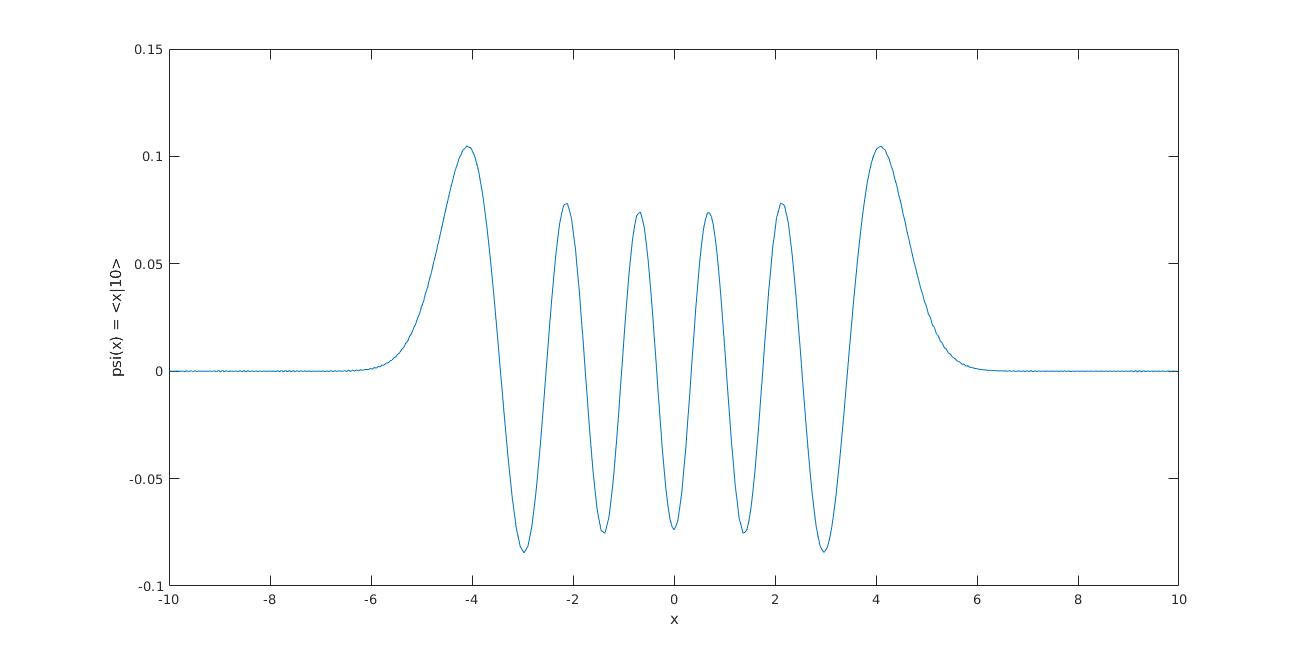 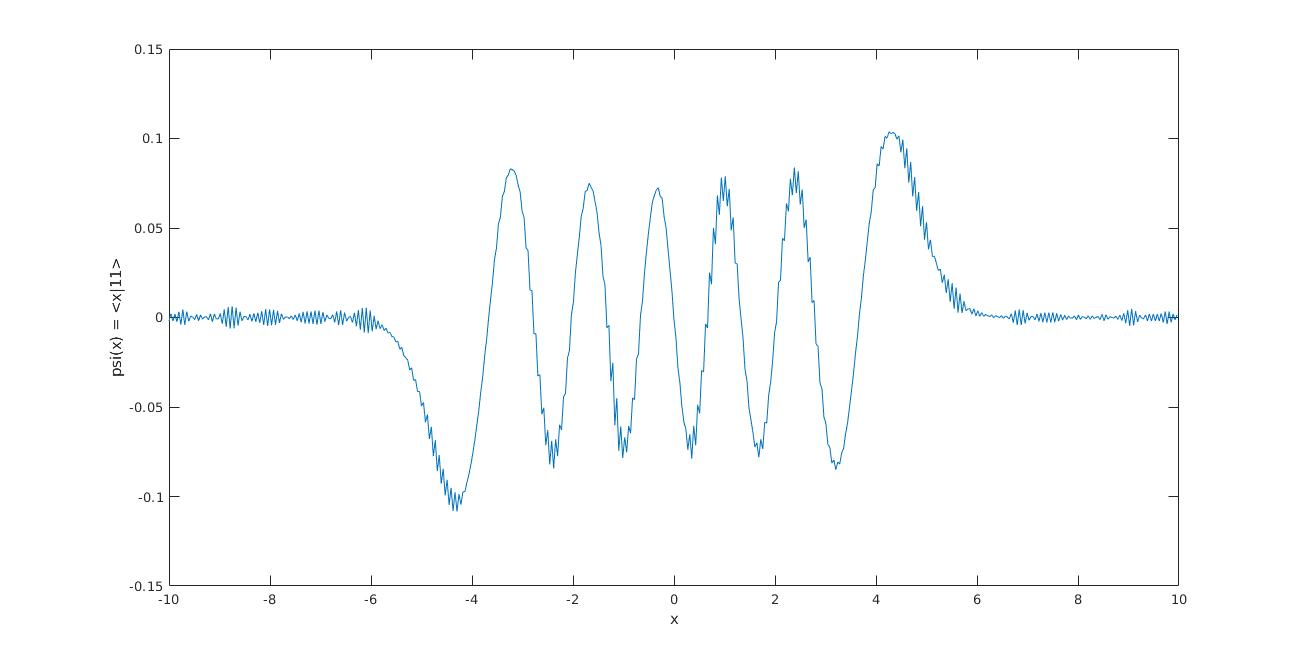 I'm posting my comment as an answer, partly to guard against link rot, and partly because I noticed a couple of minor errors.

I found this at Heiko Bauke's blog, which also refers to a paper by B Bunck BIT Numerical Mathematics, 49, 281 (2009) where more details are given (and yet another method involving evaluation of contour integrals is proposed). So the credit really belongs to them.

To guard against link rot, I'm copying the code here from Bauke's blog, but I emphasize that credit really belongs to Bunck and Bauke. I have made a couple of changes. Firstly, there was a typo in the statement evaluating $h_1$ (an undefined variable norm) which I've corrected. Secondly, I've inserted a guard against taking the log of zero, which can happen when one of the $x$ points coincides exactly with a zero of $h_n(x)$: the most obvious instance is $x=0$ for odd $n$.

Any other changes are cosmetic. I hope I haven't introduced any new errors. You should check this for errors if you use it or convert it to Matlab. This approach using the recursion relation is most suitable when you want to calculate the $h_n(x)$ for many values of $n$ up to some maximum, in which case this function can be re-written to return all of them. I've done some preliminary tests, here for instance is the result for $n=800$ at high $x$, pretty much copying what was on Bauke's blog. 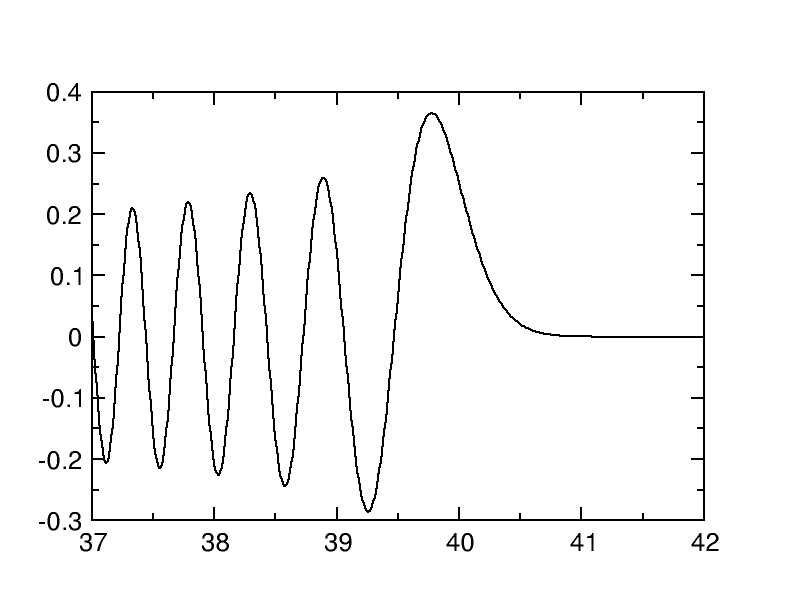 EDIT following OP edit to, and comments on, question.

The Hermite function recursion relations are \begin{align*} h_n'(x) &= \sqrt{\frac{n}{2}} h_{n-1}(x) - \sqrt{\frac{n+1}{2}} h_{n+1}(x) \tag{1} \\ xh_n(x) &= \sqrt{\frac{n}{2}} h_{n-1}(x) + \sqrt{\frac{n+1}{2}} h_{n+1}(x) \tag{2} \end{align*} Subtracting (2) - (1) gives the equation you are using to calculate $h_{n+1}(x)$, with the "raising operator" appearing on the left, and $h_n'(x)$ approximated using FFT. Eqn (2) is used in the algorithm given above in my answer. I have used this to generate $h_n(x)$ functions as a reference, and hence obtained accurate derivatives through eqn (1). Comparing with your Fourier evaluation of $h_n'(x)$, from the same accurate functions $h_n(x)$, shows that Gibbs-type oscillations do indeed start appearing, due to the discontinuities at the edges. Iterating your algorithm would be expected to amplify these effects at each stage. I cannot be sure that this is the complete answer to the problems with the FFT approach, but that's as far as I'm willing to go. If you are continuing the analysis, I suggest that you look at the accuracy of each derivative step in the way I just described, rather than simply examining the output of the whole algorithm, which will show the accumulated errors.

I did some more investigating about the accuracy of the standard recurrence relation method vs. the newer Bunck algorithm. It seems that in fact the Bunck algorithm is generally more accurate for all $n$ and $x$. I made a python script using the mpmath arbitrary precision library to calculate the Hermite functions to lots of decimal places, and then compared that result with the GSL recurrence relation approach and the Bunck method as implemented in LonelyProf's answer.

Now to explore larger $x$ ranges, I have the below figure:

which shows that both methods give similar accuracy until the "large x" region in the middle.

I made similar plots for a wide range of different $n$ values and found basically the same behavior overall. My conclusion is that the new Bunck algorithm is as accurate as recurrences for small $x$, and more accurate for large $x$. If Bunck's claim is true that his method is also faster than recurrences, which he says in his paper (I have not done any benchmarks), then I would conclude his method is superior to the recurrence method in general.

Not the answer you're looking for? Browse other questions tagged matlab stability fourier-analysis numerics or ask your own question.