Why are Runge-Kutta and Euler's method so different?

I am solving a system of linear equations, $\underline {\dot x}=\underline A\cdot \underline x$, numerically. I have done this using the popular of methods of Euler and Runge-Kutta (RK). I have noticed quite a difference between the two in accuracy to the analytic solution. What is the reason for this?

First thing, you could have mentioned, what RK method you have used. Here is a brief introduction to RK methods and Euler method, working, there merits and demerits.

Euler's method is first order method. It is a straight-forward method that estimates the next point based on the rate of change at the current point and it is easy to code. It is a single step method. Notably, Forward Euler's method is unconditionally unstable for un-damped oscillating systems (such as a spring-mass system or wave equations) in space desctretization. For complex problems and/or boundary condition it may fail. It can be used for basic numerical analysis. This method is not commonly used for spatial discretization but some times used in time discretization. This scheme is not recommended for hyperbolic differential equation because this is more diffusive. Order of convergence of this scheme with grid refinement is very poor. Extending Euler method to higher order method is easy and straight forward.

Runge-Kutta methods are actually a family of schemes derived in a specific style. You can refer this link to get a basic idea of RK methods: http://web.mit.edu/10.001/Web/Course_Notes/Differential_Equations_Notes/node5.html

The forward Euler method is actually the simplest RK method (1 stage, first order). Higher order accurate RK methods are multi-stage because they involve slope calculations at multiple steps at or between the current and next discrete time values. The next value of the dependent variable is calculated by taking a weighted average of these multiple stages based on a Taylor series approximation of the solution. The weights in this weighted average are derived by solving non-linear algebraic equations which are formed by requiring cancellation of error terms in the Taylor series. Developing higher order RK methods is tedious and difficult without using symbolic tools for computation.

The most popular RK method is RK4 since it offers a good balance between order of accuracy and cost of computation. RK4 is the highest order explicit Runge-Kutta method that requires the same number of steps as the order of accuracy (i.e. RK1=1 stage, RK2=2 stages, RK3=3 stages, RK4=4 stages, RK5=6 stages, ...). Beyond fourth order the RK methods become relatively more expensive to compute.

You can try this experiment in your code with different differential equations, different number of grids with Euler and RK4 if you have enough time. Order of convergence of scheme can be find out by calculating slope of plot - $\log(\mathrm{error})$ vs $\log(\mathrm{grid\ size})$.

The Euler method does not take into account the curvature of the solution, so it tends to give different results depending on the step size. RK, depending on the order, takes into account the curvature. And this makes the estimated "next step" more accurate. Basically, if you are pretending a straight line is a good approximation of a curve (Euler) you will always be overshooting your solution. But if you take account of the curvature (RK) you can follow the curve.

I recommend you read about these algorithms. You can start with Wikipedia articles here and here.

Forgive me for adding a me-too answer, but I just couldn't resist including this page from Press, et al: "Numerical Recipes in C": 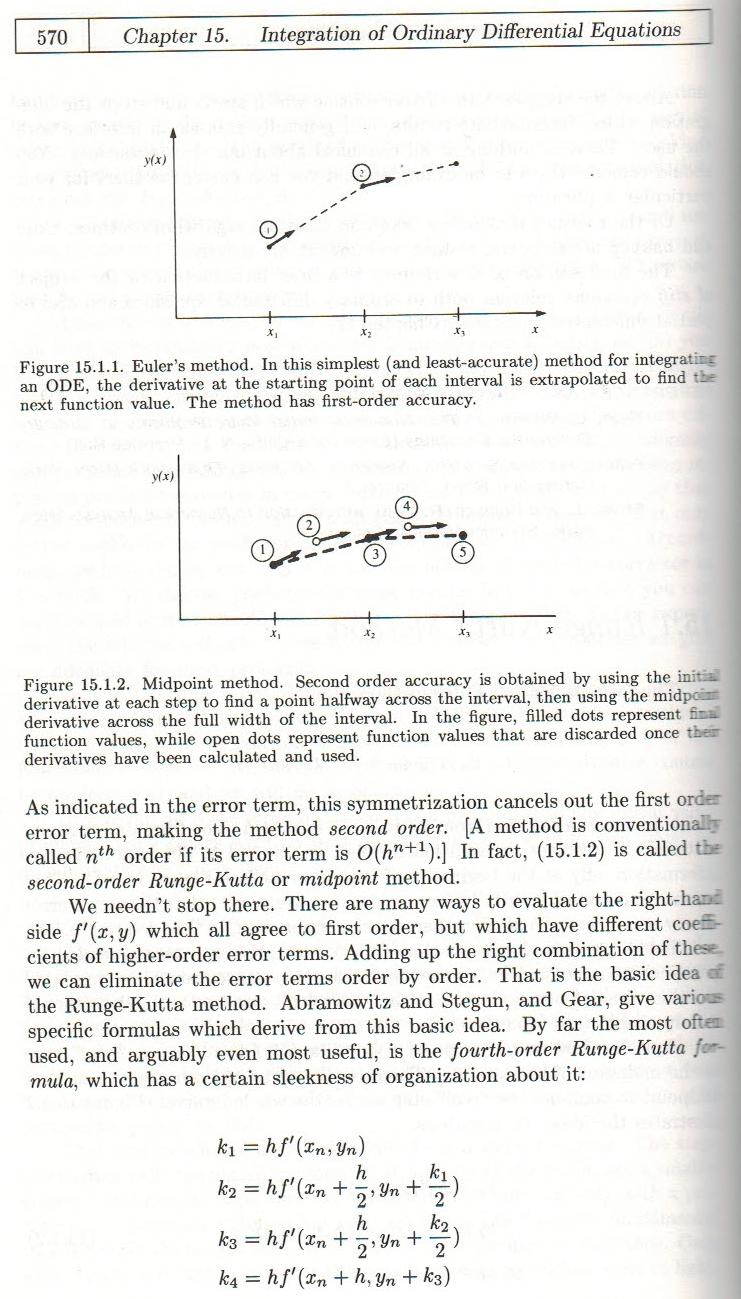 Basically the reason they have different levels of accuracy is in the way they are derived. The (I'm assuming forward)Euler method is first order and can be derived a number of ways. Most easily from Taylor's theroem. In that method, only the second order term is retained thereby making the error first order.

Runge kutta methods on the other hand are staged and have very specifically chosen coefficients to "cancel" out several orders of error terms. Rk4 is fourth order since the zeroth, first, second, third order error terms cancel out by the choice of stage coefficients. The derivation of these coefficients is not very difficult and can probably be found on wikipedia if you're interested in seeing it.

4
Error in result of finite-difference approximation when refining

10
Can I use an explicit time stepping scheme to determine numerically whether an ODE is stiff?
5
Numerical instability of spherical pendulum
4
Coupled nonlinear PDEs with time dependence on the RHS
13
How to formulate lumped mass matrix in FEM
2
Time integrator for a WENO scheme for advection equation
4
Time discretization: Runge-Kutta methods vs. standard backward difference
3
Developping PDE with Python symbolically and numericaly
0
Confirmation of FSAL property for IMEX methods by Kennedy and Carpenter
1
Stability Criteria for Numerical Solution of Windkessel Ordinary Differential Equation