My goal is to numerically solve the convection-diffusion equation of the form:

$C$ is concentration and $D$ is the diffusivity constant. I am simulating this on a small flat plate model of porous media. 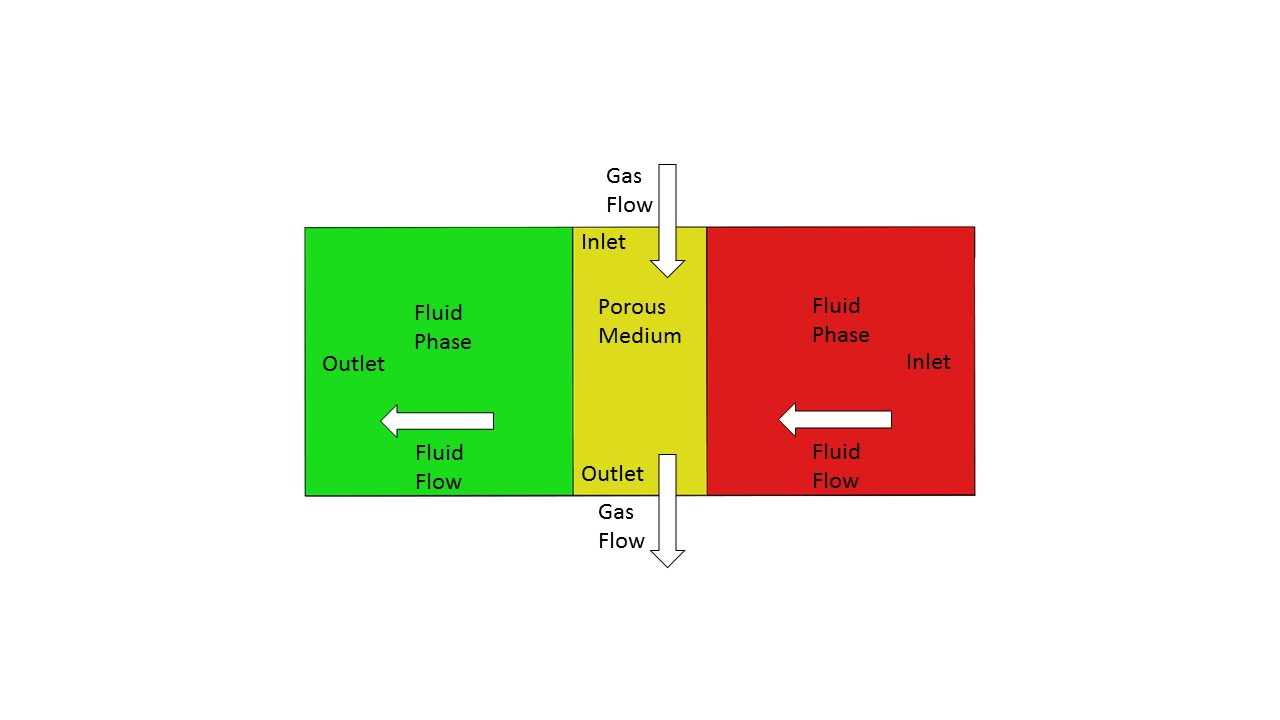 I am assuming that fluid flow goes across the plates through the porous media from right to left and gas flow occurs from top to bottom inside the porous media and mass transport occurs between the gas and the fluid. I am modeling this in a commercial solver.

I keep having trouble modeling the gas flow. I tried setting a gradient by assigning a constant pressure at the inlet and outlet of the porous media but that does not seem correct.

I'm beginning to think that there is a more fundamental problem with my approach.

My question: is it correct to assign a gas pressure or a mass flux at the inlet and outlet to the porous domain?

I presume that your fluid phase is liquid, for example, water.

If that is a case, you have liquid and gas, and porous material, thus you have capillary pressure in the liquid. At the microscopic scale, this is described by Young-Laplace equation. At the macro scale, your flow is the unsaturated flow problem.

The capillary pressure depends on water content density. It is a semi-empirical relation between liquid content and capillary pressure, called resorption curve. Such problems have been studied in soil mechanics and civil engineering in general, including modelling of concrete. The hydraulic conductivity is strongly nonlinear, which drops quickly to very small values (to zero) when with dropping water content.

You can find several models developed for soils, most popular is Van Genuchten model, with in applied with Richards equation give strongly nonlinear parabolic equation.

I do not know exact conditions under which you solve your problem, but it could be premature, that phenomenon which you try to solve is driven by the convection-diffusion equation.

If you are interested, I have free/open code for unsaturated flow using mix formulation (using RT elements) which can be, relatively easily, generalised to the case with the flow of gas phase.

About your question, what boundary conditions you like to apply depending on what you know about fluid phase, if you now pressure on both sides, then apply it. If you measure influx, apply it.

Since you are trying to solve a scalar field $C$, you should be worry about boundary conditions for your primal variable in the case $C$, injecting water or gas will describe the velocity field $v$ to be incompressible ($\nabla \cdot v = 0$) or not ($\nabla \cdot v \neq 0$).

In the other hand if you are solving the velocity field $v$ with a CFD solver, then you are simulating the mixing of two flows, in that case imposing velocity at both inlets and pressure at outlets may be a good form to tackle your problem.

At the membrane side specify a mass flux boundary condition which depends on the gradient in $C$ across the membrane:

Where $D$ and $k$ are the diffusion coefficient and mass transfer coefficient respectively. Usually, these are related through so-called Sherwood relations where the Sherwood number $Sh=kL/D$ and $L$ is a characteristic length scale (e.g. membrane thickness).

These Sherwood relations are a function of the Reynolds number $Re=UL/\nu$ where $\nu$ is the kinematic viscosity and $U$ is the average fluid speed. In this way the mass transfer across the membrane is coupled to the fluid flow.

I like this. I will address the following question:

Boundary conditions (BCs) are prescribed behavior involving the variables of the problem. The more you add, the more your problem will be described; at least from the computer code standpoint. Since you are solving for a scalar-valued concentration $C$, then one common BC you can prescribe is the Robin boundary condition (see previous link for details): $$ a C + b \frac{\partial C}{\partial n} = g. $$

Note that the Neumann component on the aforementioned equation; i.e. $b \frac{\partial C}{\partial n}$ is a good start to study the normal concentration flux at the boundary. In general, these are very useful for these type of problem in the case you need to prescribe an insulation condition on your variable of interest; i.e. from Wikipedia:

Therefore, I would advise to further study Robin BCs in this context, in order to learn the advantages these may bring to the table, in terms of imposing a mass flux at the interfaces, which are indeed boundaries to each individual sub-volume.

Not the answer you're looking for? Browse other questions tagged pde fluid-dynamics boundary-conditions or ask your own question.

5
Finite-difference discretization for a convective term
8
Finite difference scheme for compressible nonisothermal flow in porous media
0
zero pressure gradient flat plate CFD++
3
Darcy Flow - Solution by Finite Difference
1
Instability of pdepe in Matlab... boundary conditions?
2
What are acceptable boundary conditions for porous media flow?
2
How should I set the velocity conditions when you have a pressure inlet and pressure outlet?
3
Pressure-Pressure BC
1
Would modeling a fluid flow that decreases in magnitude violate conservation of mass?