Runge-Kutta when time dependence not known

As a simple exercise for a class in computational methods for physics, we've learned how to implement the RK4 (Runge-Kutta 4th-order) algorithm for a very simple exponential decay. E.g. the function y(t) is governed by

Based on the RK4 definition from most sources, and specifically in this case Wikipedia, 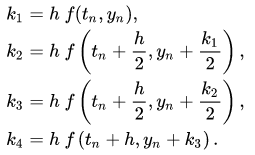 However, since I don't know y(t) for arbitrary times (that's what the RK4 approximation is trying to calculate), I can't easily get f(t+h/2, y+k₁/2) like in the Wikipedia notation for k₂.

My question is: When the time dependence of f(t, y) is not known in an exact form, would it be possible to just use Euler’s method of approximation for f(t, y) for all of the kn values instead of just k₁?

That's exactly what Runge-Kutta does: You have a differential equation y' = f (y, t), and you calculate those values and plug them into the Runge-Kutta formula. Of course you don't know y (t) exactly, that's what the formula produces for you.

PS. Keep your fingers away from the Euler approximation. The coefficients in the Runge-Kutta formula are very, very cleverly calculated to give you the best possible results. If you mess with it by trying to somehow put Euler approximations in there, you just mess it up and totally destroy your precision.