I wanted to attempt an implementation of a finite-difference-based solver for the 2D elctrostatic Poisson equation when metallic objects are present. Also, I hope to take as input, the location of charges and their magnitude.

For the sake of simplicity, I consider a rectangular domain, inside which I attempt to solve the equation. 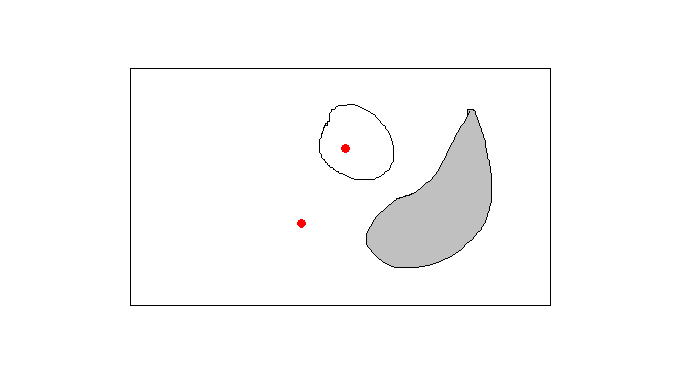 I have the following three points that I wanted to get some advice on:

1) Condition at points on metallic objects:

For the objects (which could be shells or filled), I intend to use the fact that metals are equipotential. To bring this into a matrix equation, what I thought was this: given an object, pick a point in/on it as a reference, and set the potentials of all other points to be equal to the potential of this point.

I have studied some bit of surface integral equations; if I assume that the potential inside the domain is $\phi_{1}$, and outside, it is $\phi_{2}$, then the following boundary condition holds:

Here, $g(r,r')$ is Green's function for the 2D Poisson equation in free space, that is, it satisfies the equation

However, I would appreciate any suggestions for alternative boundary conditions, since this integral makes my otherwise sparse matrix dense.

What I basically want to enforce through this integral is that there is no object or source or anything outside the boundary; i.e. the domain is an artificial limiting of the space under consideration.

Does anyone know of any boundary condition for electric potential that performs the same task, but is something like the Robin BC in electromagnetism?

Since this problem will generate a sufficiently large (but somewhat sparse) matrix, should I use a direct solver, or should I opt for an iterative solver? From some preliminary implementations I have done for this problem, the matrix is usually $10000 \times 10000$ or somewhere of that order; the integral condition makes the matrix dense.

I would greatly appreciate help on this, since I have spent a month on this problem. Also, I am averse to using FEM on this problem, since that is too cumbersome to implement.

In case anyone wants my code for the problem (I have written it in Fortran 2003), I can provide a Google Drive link for that.)